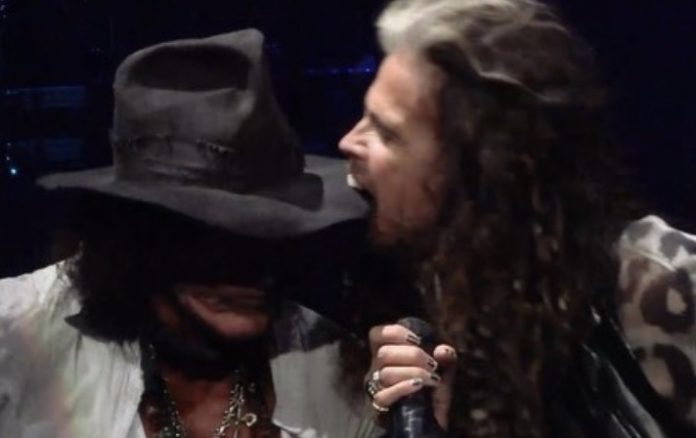 Steven Tyler‘s ex-girlfriend Bebe Buell recently posted a tribute article about the deceased frontman of The Cars, Ric Ocasek. Here, Buell discusses how she revealed how her daughter Liv was actually Steven Tyler’s to Tom Hamilton during a vacation that Ric Ocasek helped arrange. Steven Tyler’s‘ open relationship’ with this big name revealed.

Steven Tyler daughter’s reveals huge ‘gut’ photo. Buell stated: ” For my Christmas present that December 1978, Ric gave me a vacation at La Samana in St. Martin. He said he wanted Liv and I to go for a week and rest. I took my platonic friend Mark, who was kind of like a semi manager for me, and we rang in 1979 on the island. Also at the resort for that New Year’s celebration were Jackie Kennedy and her sister, Lee Radziwill, who took a shine to baby Liv. Dustin Hoffman and his then-wife Ann were there, too, and Liv often frolicked on the beach with them. It was surreal! It was one of the sweetest gifts someone has ever given me. Such a generous thing for him to do.”

This Steven Tyler new ‘drug treatment’ was just revealed. She continued: “Ric arranged everything so we wouldn’t have to worry about anything while we were there. I’ve got the most beautiful photos of Liv playing in the sea and the pool. It was such a healing and mommy/daughter bonding trip for me and my baby girl who was now 18 months old. Liv didn’t cry once while we were there. All she did was laugh and she never wanted to get out of the water! Ric called daily to check on us. And in an ironic twist, one morning at breakfast we ran into Tom Hamilton and one of the other guys from Aerosmith, not sure if it was Joey or Brad, on the hotel dining deck. I remember Tom looking at me and saying “Bebe, she looks exactly like Steven. Holy shit!” I told him to “shhhhh” and he walked to his table with a stunned look on his face. That was just a speck of what was to come. Destiny was unfolding before my eyes.”