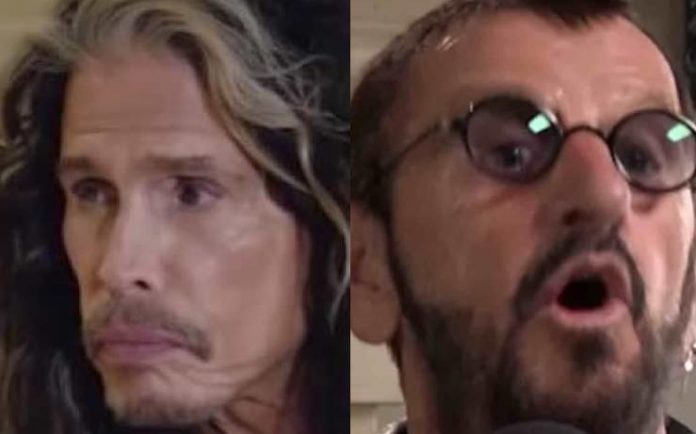 Sad Ringo Starr news! Aerosmith frontman Steven Tyler recently took to social media via Instagram to showcase this little segment of his morning routine while listening to the hit Ringo Starr song ‘Good Morning, Good Morning’. However, right at the end of things, you can see Tyler not having it anymore and shooing away the filmer of the video to end the clip. You can view this snippet below. Ringo Starr eerie ‘last’ Neil Peart photo revealed.

In other news regarding Ringo Starr, fans recently took to social media to discuss and reflect upon one of Ringo’s most popular solo albums – ‘Goodnight Vienna’. One fan stated: ” Not until recently did I notice how incredibly well recorded this album is. I’ve heard it since it was launched but not until recent years have I owned revealing audio equipment. Now I can really make comparisons to other well-recorded albums. It’s absolutely one of the
best sounding pop-rock albums I have.” Bono family leaks creepy Ringo Starr photo to U2 fans.

The fan continued: “Of course, it helps that the music is gorgeous too. The same production team went to produce the also great and great sounding ‘Ringo’. Curious that Ringo Starr seems to be the more preoccupied with this matter of good sounding recordings as I’ve always felt that the Beatles as a group or as individuals were lacking I that department, although things do get better in that department after the mid-70s.”

Michael Jackson family drops creepy Ringo Starr bombshell. While another fan said: “Ringo uses outside material for his fourth album, proves effective in choosing a material that suits his style. Check out his cover of Roger Miller’s Husbands and Wives, The Platter’s Only You, and the tongue in cheek no no song. He doesn’t take himself or the material too seriously, but still injects a lot of energy and humor to his performances. Bonus material: back off boogaloo single and its flip side blind man.”