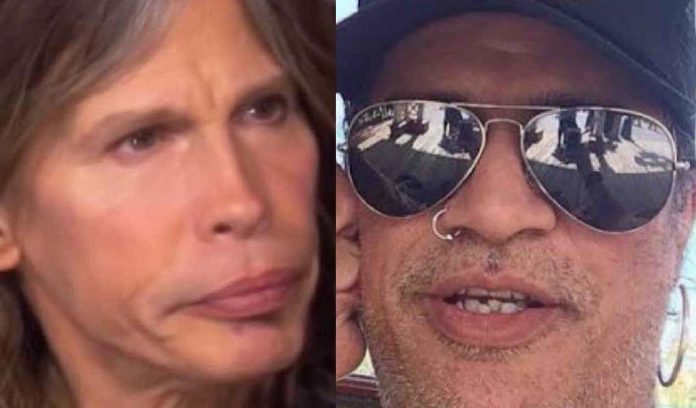 rileysgam commented, “Hope he’s on vacation. 🤔 You make it sound like he died.” rambofoods wrote back, “@rileysgam yeah wtf ? Lool he could have worded it better.” joeperryfan910 responded, “@rambofoods he did the same thing last year, but made it sound more like he died 😂😂💗”

Slash posted an eerie Chris Cornell photo over the weekend. Kang wrote on the Aeroforce forums about a recent Aerosmith show in Shakopee, Minnesota, “Setlist was pretty straightforward with no real surprises, but I thoroughly enjoyed it. Headliners the other two nights were Rascal Flatts and Tim McGraw, so I think a big part of the crowd were country fans and they just want to hear the big Aerosmith hits.

Steven tried to get the crowd to sing the first verse of What it Takes and it totally fell flat. He even commented that it was the first time in 10 years that’s happened. I saw two Vegas shows which were great, but they didn’t play Draw The Line or Last Child at either so I was stoked to hear those on Friday night. To me Draw the Line is the quintessential set opener, just has a great feel to it and gets the show off to a great start every single time.

I don’t remember exactly when it was, but around the time they were doing co-headlining shows with Motley Crue, to me it seemed like they were just going through the motions. Shows were still good but they lacked a certain energy. I guess I’m not sure how to describe it but the shows weren’t as fun for me. After seeing them three times this year I can certainly say that is no longer the case. The band genuinely seemed to be having fun on Friday and it made the show that much better. Weather held out, I lucked into a good seat, and the band delivered. Pretty memorable night.

Setlist below. Another thing that added to my low expectations is the set times only had them listed as playing for an hour which I thought was really odd, but they did in fact play for 90+ minutes.”