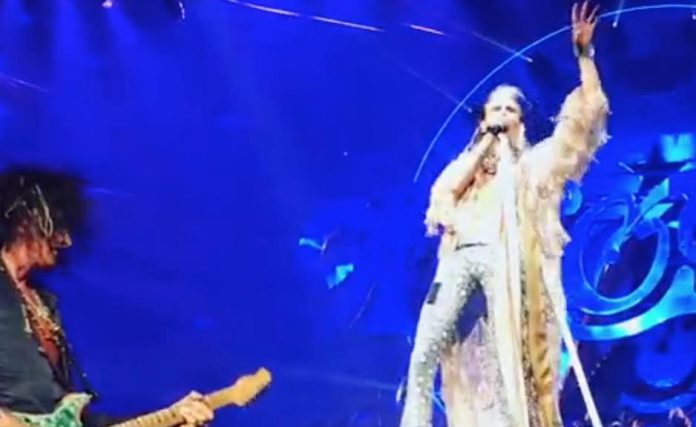 Steven Tyler and Aerosmith superfan Aхel Kυѕcнevaтzĸy recently took to social media via Twitter to respond to a video of Genesis great Phil Collins who was performing his hit song ‘In The Air Tonight’ at a local middle school. This prompted the Twitter user to share a similar experience that he shared regarding Tyler. The user wrote: “Steven Tyler sang at my brother´s graduation in Berklee with students playing along with him. My dad, who doesn´t like Rock at all, hated the guy while he kept singing all the Aerosmith classics for just 300 guests. Ouch!” Steven Tyler ‘embarrassing’ Aerosmith tour replacement leaks.

In other news regarding Steven Tyler and Aerosmith, fans recently took to social media to look back upon one of Aerosmith’s most overlooked albums – ‘Night in the Ruts’. One fan stated: “This could be considered the last of the “classic period” for Aerosmith. The famous line up disintegrated halfway through the recording process and it wouldn’t be until six years later that another one of their albums would hit platinum. The band is clearly on their last legs, but there are still a few gems to be found. I wouldn’t call this bad by any means, as it is FAR above truly terrible albums (looking at you Van Halen III and St. Anger), but a lot of the musical magic has faded away.” Steven Tyler girlfriend leaks painful Joey Kramer photo.

Steven Tyler’s daughter bends over in black lingerie photo.  The fan concluded: “It can’t stand up to Toys or Rocks and the wild experimentation of Draw the Line is gone as well, leaving a decaying shell of a not quite dead-band left over. I’m glad I finally got to this one and again I wouldn’t call it bad, as even the worst song on here is still somewhat enjoyable, but it’s the weakest of the “classic” six albums. This is the only album I hadn’t heard completely where I didn’t save one of the unheard songs to my Spotify.”

Steven Tyler sang at my brother´s graduation in Berklee with students playing along him. My dad, who doesn´t like Rock at all, hated the guy while he kept singing all the Aerosmith classics for just 300 guests. Ouch! https://t.co/udgAtaqQcr