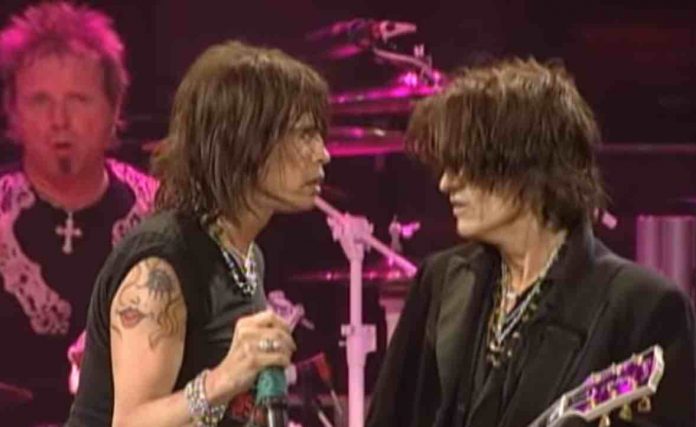 The official Instagram account of Steven Tyler and Aerosmith messaged out the sweetest story you’ll hear all day. Here, we are told about how the group go their first ever gig, which was played at Nipmuc Regional High School in Mendon, MA – and it was all due to Joe Perry’s mother! Steven Tyler recently unloaded on a fan for sitting down at a show.

As the official Aerosmith account explains: “The new band got the gig because Joe Perry‘s mother, who worked at a nearby school, knew someone at Nipmuc, and helped set it up. At the time, Ray Tabano was on rhythm guitar. He would be replaced by Brad Whitford a year later. Tickets for the show cost about a dollar.”

Steven Tyler’s daughter recently revealed this bathroom accident video. Aerosmith fans reacted very strongly to the photo and story which was also posted on the band’s official Facebook page. Claire said: “Great photo guys which was the start of the most awesome band you have become you have had your troubles what band doesn’t but with everyone you have come out of them a much stronger unit with the help & support of a very strong fan base plus everyone else around you we love you guys.”

Lana wrote: “I heard this story and Joe should be grateful to her mother for contributing to his future career .. And after all, she was not mistaken in her son. I adore you all very much. I love you all very much. You are all, the best of the best.“

A Steven Tyler ‘in the closet’ claim revealed by this woman. Cheri put: “Look at those fine faces. What a wonderful life of music you have provided to all of your fans everywhere. We love you, we appreciate you, and as always we are still right there rocking our ***** off to your music.”