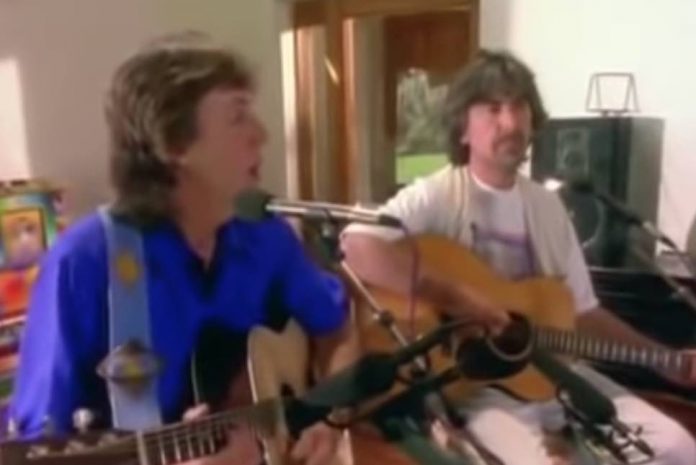 Gross Paul McCartney news! The official Instagram account for John Lennon posted this controversial Beatles cover which some consider the most shocking part of Beatledom. This being the original cover of The Beatles’ hit 1966 album ‘Yesterday and Today’ which features very gruesome imagery. The ‘Fab Four’ would create a more ‘clean-cut’ cover for this album later on. Paul McCartney recently caught wearing terrible wig in photo,

Here, this particular album cover features signatures from both Paul McCartney and Ringo Starr. Lennon’s account wrote: A U.S. First State Butcher album prototype stereo example, considered by Beatles experts as one of the rarest Beatles records in the world. The recipient was Dave Morrell, a Beatles fan and bootleg collector, traded for a reel-to-reel tape of Morrell’s ‘Yellow Matter Custard’ bootleg that Lennon desired. Lennon filled the blank back of the cover with an original piece of art (see yesterday’s post) depicting a man holding a shovel with his dog in front of a setting sun. The cover also includes autographs by Ringo Starr and Paul McCartney, which Morrell obtained later. This is believed to be the only First State Butcher album bearing three Beatles signatures” Paul McCartney reveals what Howard Stern did to his wife.

In other news regarding the Beatles and Paul McCartney, fans recently took to social media to reflect upon the controversial aforementioned album. One fan wrote: “A fabulous album from the Fab Four. Not a single throwaway tune on this set, not that they ever had a throwaway they didn’t. One of my favorite songs by the band the dreamy “I’m Only Sleeping” is here as is the brilliant “Nowhere Man”. One of the best and most important songs the Beatles ever recorded, “Yesterday”, graces this disc. Another favorite by this band, “We Can Work It Out” is on this disc as well. The hits keep on comin’. Mono and stereo versions of each song is represented on this CD. We get two Ringo sung songs. They’re great. My copy of the disc has the boys in butcher coats with raw meat and baby parts strewn about. Just as I remember it from my childhood. These guys never did a mediocre song in their lives as The Beatles in my honest opinion.” Paul McCartney revealed an ‘overweight’ secret not too long ago.