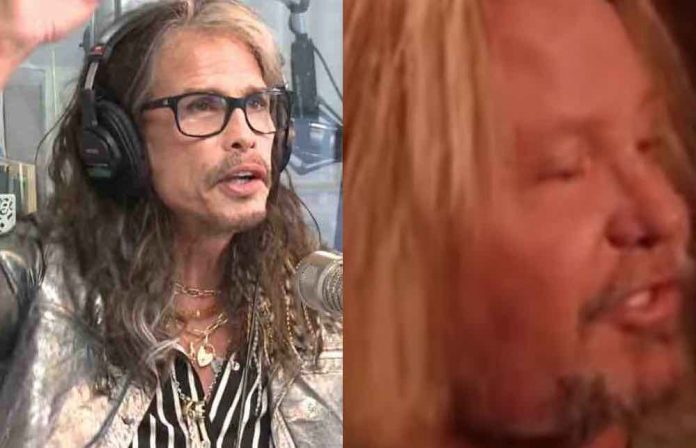 Co-writer of Steven Tyler and Aerosmith’s hit 1987 single, “Dude Looks Like A Lady” Desmond Child was recently interviewed by all-around metal god and rock historian Eddie Trunk. Child has several songwriting titles to his credit including KISS’s “I Was Made for Lovin’ You”; Joan Jett & the Blackhearts’ “I Hate Myself for Loving You”; as well as another major hit for Aerosmith in 1987 – Angel. This Aerosmith icon recently broke his silence after a retirement rumor.

Steven Tyler announced a couple of months ago that Kramer had broken his foot, and he even came onstage to say hello. Here, Child discusses how Vince Neil, the legendary lead vocalist for Motley Crue was the accidental inspiration for this classic Aerosmith track.

“So Steven [Tyler] sheepishly said “Well, when I was first singing that riff I was singing ‘Dude Looks Like A Lady'” I said, what? He repeated himself. I said that was brilliant and a hit. Joe [Perry] was trying to say that they ‘didn’t know what that means’. I knew what it means, but told him just to follow me with this.”

“I asked how he came up with the song and Steven said they were in a bar on the shore, it was after hours and they had gone there and they were all in programs and couldn’t drink or anything. So, they are all drinking their sodas, even the roadies and at the end of this long bar, nobody else on the stool, airing in there was this huge, blond, platinum mullet and a very curvy figure with black nails, jewelry, just very, you know, inviting. So, they were all drawing straws to see who would go and introduce themselves and stuff.”