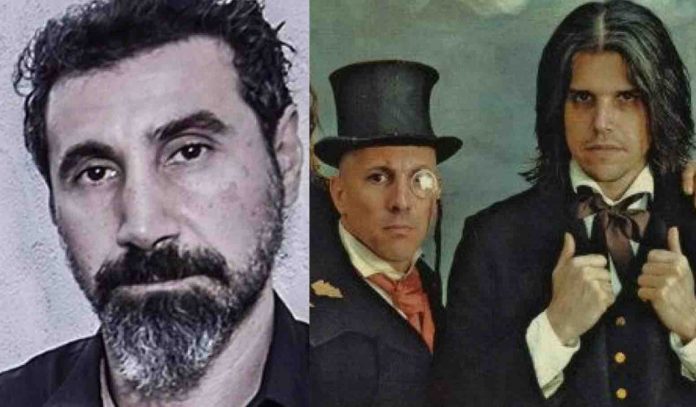 System of a Down singer Serj Tankian shared an embarrassing photo of Tool guitarist Adam Jones on his Instagram feed by commenting on Rage Against The Machine guitarist Tom Morello’s post about Jones, which features some old photos of Morello and Jones with some brutal haircuts performing!

Morello wrote, “Shoutout to my old friend @adamjones_tv. Always a tremendously creative and innovative VISUAL artist, Adam was also the bass player and sole talented musician in our high school band, #TheElectricSheep. He showed me chords, ‘pinch’ harmonics, drove us to see @judaspriest at Alpine Valley in his pick up truck for inspiration and was ceaselessly encouraging to me when I was a beginning guitarist.”

Rage Against The Machine dropped a Tool 2020 bombshell last week. Morello added, “Adam was my roommate briefly when he first landed in LA and paid his rent by sharing his extensive (and exotic) VHS collection with us. He was also responsible for helping jump start my career when he dragged me out of bed on a work night to go all the way downtown to Al’s Bar where a great band called Lock Up was playing.

I later joined the band and got a record deal. I was impressed when Adam landed a job at Stan Winston Studios and became a successful prosthetic make up artist, working on Jurassic Park and the Nightmare On Elm Street movies.

I saw his band @toolmusic at their first show and was stunned. They arrived fully formed and fully great. They also were kind enough to invite #rageagainstthemachine to open for them numerous times in Hollywood clubs which greatly helped grow our following and get us attention. I’m proud and pleased that all these years later he and his band are thriving and kicking ass around the world. Cheers buddy! #HolidayFriendShoutOut.” Serj Tankian commented, “Beautiful.” Maynard James Keenan was booed at a recent Tool concert.