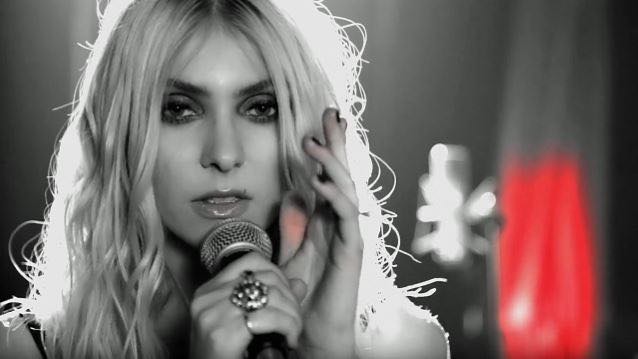 Ride em’ cowgirl! An Instagram fan account for The Pretty Reckless singer Taylor Momsen recently took to the social media outlet to post this picture of Momsen in an unconventional and unorthodox cowgirl outfit. You can view it below. Taylor Momsen ‘tiny’ shorts photo with abs leaks.

In other news regarding Taylor Momsen and The Pretty Reckless, fans took to social media recently to discuss the impact of their successful album – ‘Light Em’ Up’. One fan noted: ” The Pretty Reckless’ 2011 album is a good debut for Taylor and the boys. It is a popish heavy metal album that kind of reminds me of (beware SoCal reference here) KNAC and the Sunset Strip, you know, that spawned 80’s metal; But Taylor Momsen is way sexier than Brett Michaels or Vince Neil ever were – at least to me, and her voice is distinctive enough that she is easily recognizable. Speaking of Taylor’s vocals, they are emotive, full of attitude, and just plain sexy. Unlike most of those early/mid-eighties hair metal bands The Pretty Reckless has at least a little bit of punk attitude/influence.” Taylor Momsen tight red leather outfit photo recently leaked.

Taylor Momsen tight shorts at beach photo revealed. The fan continued: “In case you are lost with the reference to the Southern California 80’s metal stuff KNAC was a local hard rock/heavy metal radio station (I think still functioning online) and the infamous Sunset Strip clubs (even though not all were on Sunset Blvd. and not all that were there deserved the abysmal rep.) that abused the dreams of gullible and star-struck musicians (most of whom were young and some were actually skilled and dedicated players) with the insidious pay-to-play scheme that ultimately destroyed that scene. Enough with the local history – back to The Pretty Reckless. Overall the songs are kind of catchy with good hooks and clever lyrics. All is well sung and played. I like the rockers better than the power ballads; your mileage may vary. My favorite track is probably the sort-of-kinky, teenage murder ballad: Goin’ Down, yeah subject matter tends toward the dark and dysfunctional. If you like this album you’ll probably welcome the more recent Going to Hell even more, from me that gets five stars instead of the four Light Me Up gets here.”