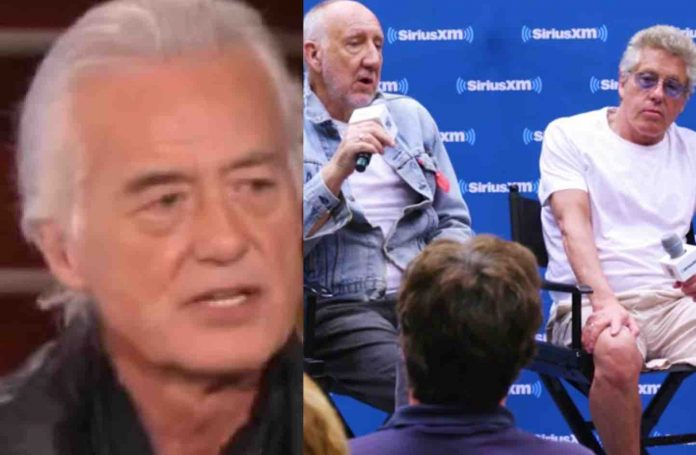 Jimmy Page looked back at recording “Bald Headed Woman” with The Who by posting a photo of the primary single cover on his social media. Robert Plant leaked a sad The Who ‘goodbye’ statement a few days ago.

Page remembered, “On this day in 1965, ‘I Can’t Explain’ by @officialthewho was released in the UK.

Today sees the UK release of the iconic ‘I Can’t Explain’ – the first single by The Who, produced by Shel Talmy and engineered by the great Glyn Johns at Pye Studios in Marble Arch, London. Although I had been contracted in to play on this session I wasn’t really needed but I played on it somewhere in the background. What a privilege it was to be part of that pure adrenaline rush.

Pete Townshend @yaggerdang played a blinder, you can hear a few of my phrases on the B-side ‘Bald Headed Woman’ on the fuzzbox.”

Jonathan_lea commented, “Very cool! I got to play this song a few days ago with the amazing Clem Burke on drums, in the presence of the original producer Shel Talmy.”

Rjc117 responded, “I love you Jimmy but I have and always will love Pete and The Who more.

Surfrby chimed in, “You played with just about everyone , amazing career and life,I like like that everyone was kind of supportive of each other in the London music scene in the sixties.”

Rudyru_80 said, “Damn Jimmy, you have the most unique musical story of any musician there’s ever been! From playing the James Bond Theme, to producing and/or playing on The Who, The Kinks, The Yardbirds, The Rolling Stones and about 100 more I’m leaving out.

Why hasn’t someone done a documentary on YOU yet? I might go see if I can get this greenlit for my maiden voyage down documentary way. I’m actually quite serious though @jimmypage you should have a documentary film dedicated to you, it’s fascinating how much musical history runs through you!” Jimmy Page recently discussed the ‘first’ Led Zeppelin tour dates in 2020.