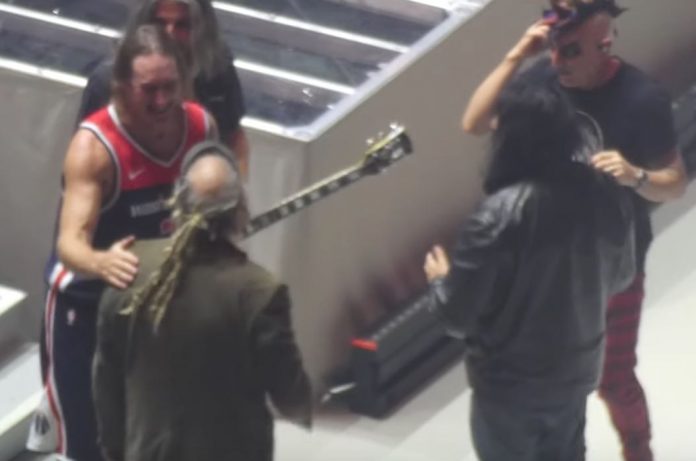 A Tool fan had his experience at a recent concert in Raleigh, North Carolina ruined by a fan who was on drugs, supposedly acid. The fan had a meltdown and fought with security. Maynard James Keenan’s emotional goodbye at the last Tool show was revealed yesterday.

SonicTitan81 posted on Reddit, “Something very odd that has never happened to me at a Tool show or any concert for that matter happened last Sunday. Me and my girlfriend had really amazing floor seats up front for Tool which I was able to get day they went on sale. Every other show we have been in the stands so this was a big deal to us both. We are both big fans, especially me, since my first show in 2001. We both are very chill people who get along with anyone and never have problems with people.

So…. we get to our seats about 10 minutes till they take the stage and notice a kid in front of me, face in hands sitting motionless. I know he’s fucked up but no big deal. First song plays, kid is still sitting motionless. Second song hit, and its Aenema, more of a hype song. The kid proceeds to STAND on his chair, turn around and directly infant of me leans into me dick level to my face and starts screaming for at least 3 minutes not turning around or standing down. His buddy and me are trying to get him to turn around and act civil before security yank him out. (Maynard James Keenan was recently injured at a Tool show)

I WANT him to have fun and rage but just not on a chair turned around and facing me. The kid doesn’t take to me asking him to stop nicely. He gets very aggressive looking balling fists up and staring at me and my girl. I was determined to not allow this to ruin my experience but he would not stop, only getting worse. So I did what I had to do before this guy threw a punch, I grabbed security and had him pulled. I felt awful and so did his friends.

They even said they were sorry and tried to buy me a drink. I dont feel bad anymore as I honestly believe I did the right thing in the moment. If he would have thrown punches we BOTH would have been pulled. Moral of the story, if you are gonna buy floor ticket, dont eat so much acid you cant control yourself. You dumb fucker

EDIT, forgot to add the security found me after the show and thanked me for getting them. Apparently he fought them physically when being removed.” A rumored Tool movie was revealed a few days ago.