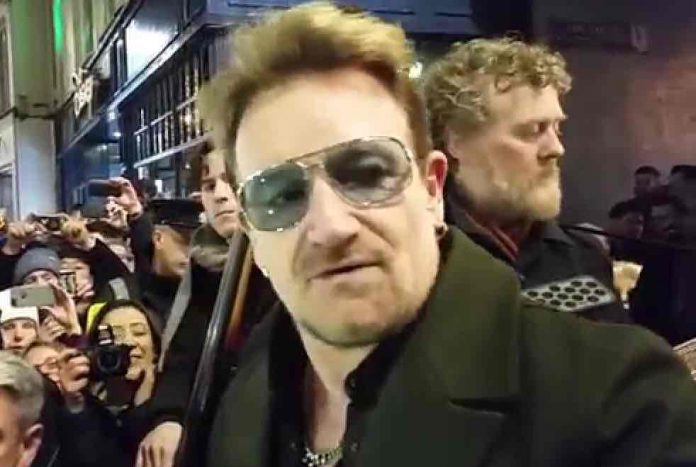 The U2 and Bono fan Twitter account, Bongolese, which specializes in posting the ‘wit and wisdom’ from the U2 frontman recently posted this quote from the acclaimed singer. The quote reads: “Painters, novelists, poets . . . just can’t be too cool. Because that’s what models are supposed to be…If your definition of art is breaking open the breastbone and pulling open the ribcage and, you know, a blood transfusion – you can’t be cool like that.”–Bono” Bono takes off pants in sad backstage U2 video.

In other news revolving U2 and Bono, fans recently took to the U2 subreddit to revisit one of U2’s most recent songs in ‘California (There Is No End To Love)’

Forest_Wave stated: “Recently I’ve been thinking a lot about this line from the second verse/chorus: “There’s no end to grief, that’s how I know and why I need to know that there is no end to love.” Wow. I hadn’t thought too much about this song before, but the power of this line just hit me out of nowhere. What other lines from this song/SOI, in general, do you love? Bono ‘begging’ for prayers was recently revealed.

U2FlyXC responded: “California is no doubt one of the most underrated songs in U2’s catalog. I can’t quite describe it, but the song does a perfect job or both addressing the beauty of innocence as well as the sadness of losing it. Obviously the song sounds fantastic but lyrically is where it really shines. I honestly just adore this song.

The user continued: “I love the line you mentioned but another great one is at the end. “We come and go. But stolen days you don’t give back. Stolen days are just enough”. Simply breathtaking.”

While kisskissbangbang46 proclaimed: “It gets compared to Arcade Fire’s No Cars Go a lot, I sort of see it. I like the intro, not something I expected…it’s catchy enough song. Not crazy about Bono wailing in the choruses, but he does overdo it sometimes. It’s fine, not a favorite from SOI, but probably still better than The Miracle, which next to Song for Someone are my least favorites.” U2 member ‘threatened’ at party, was Bono wasted?

"Painters, novelists, poets . . . just can't be too cool. Because that's what models are supposed to be…If your definition of art is breaking open the breastbone and pulling open the ribcage and, you know, a blood transfusion – you can't be cool like that."–Bono #VeryCool #U2 pic.twitter.com/SGuSRrMJ7n