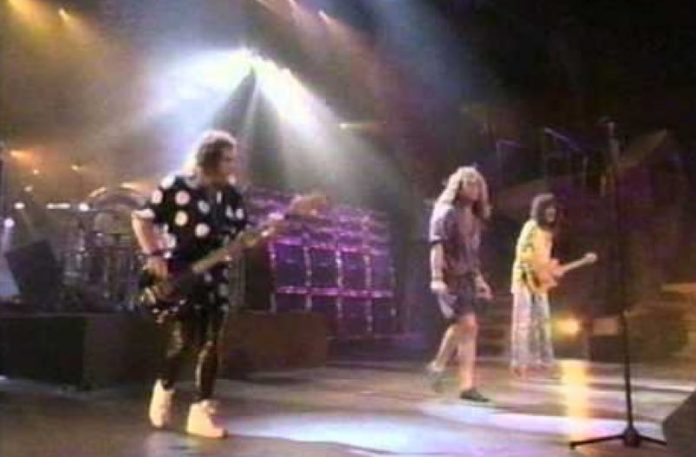 Hagar responded, “@redislandhandmade Absolutely love them I wear them tonight I’m sure you noticed! Sorry about the airport incident we were late.”

redislandhandmade responded, “@sammyhagar No worries! 😘 No apologies necessary, totally understand! Thank you for an amazing show, and yes I DID notice 😉😁😁😁❤❤❤❤❤❤ See you tonight at Northern Quest! 😘😘😘😘.”

A Van Halen icon recently revealed who went broke on his new album. David Lee Roth revealed a wild concert story on The Roth Show this week, “I’m happy to see all of you. And I have [a fire arm] in my pocket. This is called ‘The Charlie’s Angel,’ and it’s called that for two different reasons. Okay. Now watch, I’m sneaking up on somebody, okay, let’s see if we get that in focus, and I’m sneaking up on somebody in the movies. So, what I’m gonna do is having seen it on television on Charlie’s Angels, specifically I’m going to imitate it. Ready!

Now, Tom (other guy of the podcast show), I want you to pretend to be voice of the bad guy, you’ll actually be the camera. Okay? Can you hear me? Don’t cut to yourself for a fuckin’ change, and don’t make me laugh with a loaded [fire arm] with my finger on the trigger. Okay.

I got to do it all wrong exactly, and now, Tom, pretend you’re the bad guy in the camera, and call me, and in slow motion, I’ll show you what will happen actually if you imitate your early angel. Go Tom.”