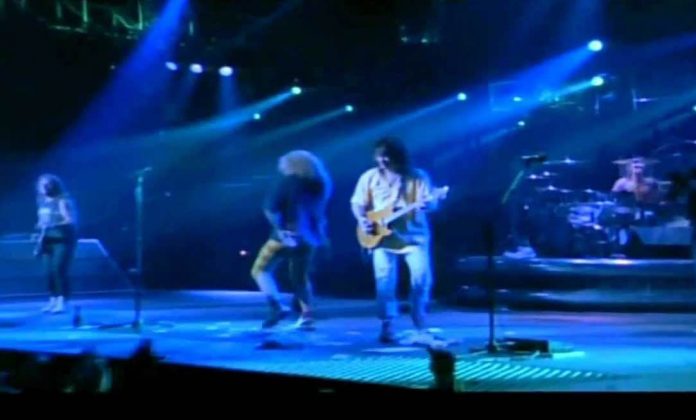 Former Van Halen frontman Sammy Hagar and the Circle have returned to the road after a July and early August hiatus, as Michael Anthony had been rumored to reunite with Eddie Van Halen, Alex Van Halen, and David Lee Roth during that time for a Van Halen reunion tour. A Van Halen member revealed his bizarre Ronda Rousey fantasy yesterday.

Michael Anthony wrote, “The Circle is killin it!!! Rockin crowds!!💥” mllee666 commented, “And I was in Hawaii dam you.” Hagar responded, “Well at least you have a good excuse.”

rockflyrs wrote, “There is this amazing state between Washington and California. You should try to drop in sometime. 😂🤘” Hagar responded, “I agree 100% I was just complaining to my manager that for some reason the promoters never book us in Oregon anymore??? Get on them👊”

A Van Halen icon revealed a video of a cop pulling him over a few days ago. Sammy Hagar and the Circle released their debut album ‘Space Between’ a few months ago. The band features Hagar, Michael Anthony, guitarist Vic Johnson, and drummer Jason Bonham, the son of legendary Led Zeppelin drummer John Bonham. Hagar recently wrapped the fourth season of his ‘Rock and Roll Road Trip’ series on AXS TV. AC/DC frontman Brian Johnson’s ‘Life on the Road’ series is set to premiere on AXS TV next month with his first guest being former The Police frontman Sting on September 15th. A Van Halen icon viciously mocked Bon Jovi a couple of weeks ago.