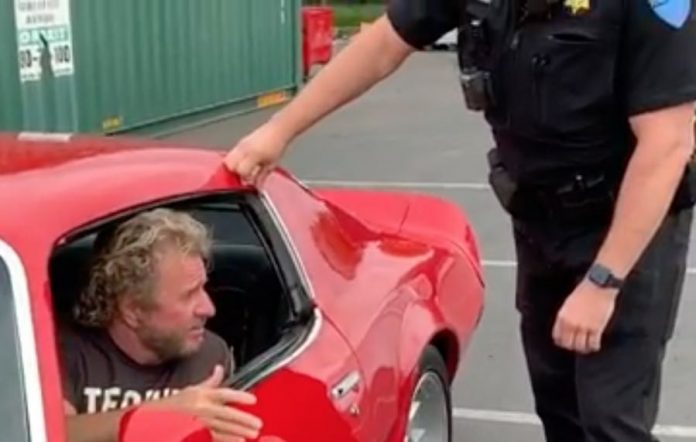 Van Halen frontman Sammy Hagar filmed a funny video of himself after being pulled over by a police officer. It’s unclear if this was a setup for just the social media video, or if it was being filmed for a television series or film. A Van Halen icon recently revealed who is ‘greedy’ on his new album.

Someone first says, “Action.” Hagar then says to the police officer, “Hey man come on, give me a break. I’m Sammy Hagar. What the fuck?” The office responds, “License and registration please.” Hagar responds, “Oh man, can you believe this shit?”

Hagar is currently on a break from his tour with his band The Circle, who released ‘Space Between’ earlier this week. Michael Anthony had expected to be on a Van Halen reunion tour at this time, rejoining bandmates Eddie Van Halen, David Lee Roth, and Alex Van Halen, but plans fell through after Anthony had spoken to Van Halen’s manager and David Lee Roth’s tour manager.

Michael Anthony was stunned by a bold Van Halen fan money demand a few days ago. A great video of a Paul Stanley impersonator singing Sammy Hagar songs like David Lee Roth was recently uploaded, and you can view it below the Hagar police officer video.

DrEd posted on the VHLinks.com forums, “This is too good not to share. This guy actually performs as Paul Stanley in a Kiss tribute band. He does a pretty good Dave impersonation. It gets real funny around 3:20.”

EVHWolf responded, “He’s got Dave speaking down. The cadence is damn good. The singing is a little forced. Guys got some serious talent though.” A Van Halen member called out Axl Rose last week.