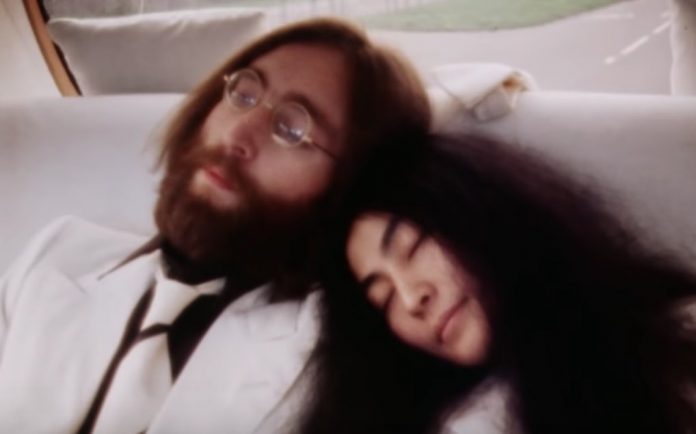 Parade said
Parade added, “The image of Yoko in the original [Let It Be] movie is very weird, with her just hovering around.”

Starr responded, “I remember, she was in bed in the studio when we got to work and it was weird. I asked John, ‘What the hell is going on?’ And he said, ‘You know when you go home to Maureen [Ringo’s first wife], she’ll say, ‘What did you do today?’ And you‘ll say, Well, I drummed.’ John said, ‘We want to be there with whatever we’re both doing.’ They wanted to be in each other’s company. And that was fine by me, once you knew what the situation was.”

Gene Simmons recently revealed a surprising John Lennon and Beatles secret. Parade also asked how the very youthful looking Starr looks so great for his age, “How do you stay in such great shape?”

Ringo responded, “I get up in the morning and I meditate. I go to the gym and I have a trainer, and I work out myself too, when I’m on the road. I’m a vegetarian. When we’re on tour, to get out of the hotel, I usually go to the local organic shop just to see what they’ve got. But I’m only a vegetarian, not a vegan. I eat goat cheese. A vegan is very hard, and they eat a lot of sugar. I’m careful about sugar.”

Ringo Starr is currently on tour with his All Starr Band, and below is the setlist from Council Bluffs, Iowa on Friday.