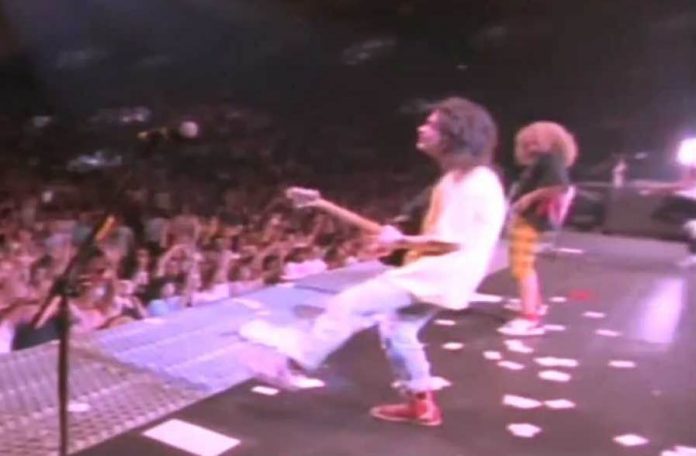 “To be honest with you, I think the business world is more brutally dangerous and treacherous than the music industry. There were so many crooks in the early days of record companies, lawyers and managers and record companies and all these people that stole your money and gave you bad deals.

But, man, you start going out there and playing with the big boys in the investment world there ain’t nobody looking out for you. You’re on your own and you can make some big mistakes. To me it’s scarier. When you make a fortune in your life, which is going back to Space Between, it’s about this guy that made this fortune and then you start saying, ‘I want more.’ And you start trying to figure out ways to get it to where you’re not realizing how you got it.”

A Van Halen icon was savagely insulted after a show earlier this week. Hagar also said, “When you’re an artist the way you got it was through creativity and being this wonderful life; rock and roll, you get to go out on tour and play and all these wonderful things happening for you. If you make it in that world that’s the good life. Then you say, ‘Well, I want more.’ You can’t get anymore that way, maybe your career starts getting over, so you start looking at business and, whew, that’s dangerous. You can end up with one false move and you’re like, ‘Whoa, gone.’ I haven’t, but I have seen it.”

You can read the whole interview at Forbes.

Sammy Hagar has been on tour with The Circle featuring Michael Anthony this year, and Anthony was rumored to reunite with David Lee Roth, Eddie Van Halen, and Alex Van Halen for a tour this summer that fell apart before it could even be announced. Some fans criticized Roth’s vocals on Van Halen’s 2015 tour, with Glenninaus writing on VHLinks.com, “My frustration with Dave live in recent years is that he CAN do it but for some reason is determined not to. When he sings in his natural baritone range he is fine and perfectly good enough for a good show, but for some reason he has invented/developed this other weird technique to try to substitute for his long lost higher register and its BAD.

I can not believe that somebody hasn’t told him. ‘Don’t do that, just stick with this.’ Somebody HAS to have but it seems evident that Dave is too much of an alpha to take it on board.” A Van Halen icon recently revealed who went broke on his new album.