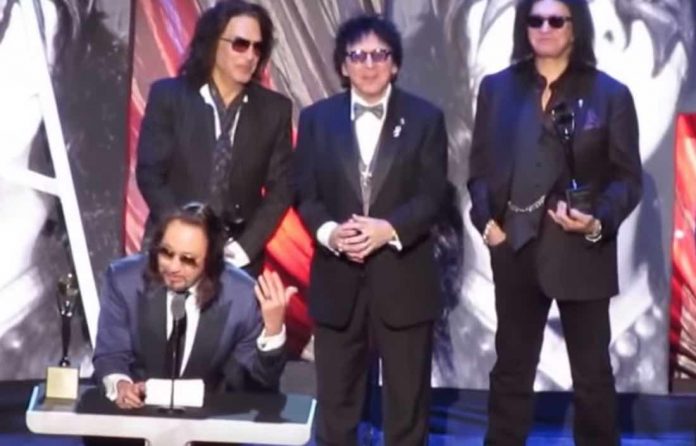 KISS frontman Paul Stanley recently conducted an interview with C-Ville to discuss a plethora of topics. Here, the man they call ‘Starchild’ opens up about the original reunion tour and how that compares to ‘The Hottest Band in the Land’s” newest farewell tour. Stanley also states how two particular members of the group original’s incarnation was making Stanley miserable. You can view those comments below. Paul Stanley ‘gains muscle’ in KISS gym photo.

Interviewer: “KISS did a farewell tour 20 years ago [ed. note: with the original lineup of Stanley, Gene Simmons, Ace Frehley, and Peter Criss]. Why should we believe you this time?”

Paul Stanley: Well, because the writing’s on the wall: We’re 20 years older, for starters. And secondly, the first time we did a farewell tour, it was ill-conceived. The idea that we should let two members who were making us—meaning Gene and I—miserable, and compromising the band, shouldn’t be a reason for calling it quits. We have always believed that the band is bigger and stronger than any individual member, and we suddenly got caught up in the idea of putting the horse down instead of just getting rid of a couple of the jockeys.” Paul Stanley ‘refuses’ final KISS tour for sad reason.

In other news regarding Paul Stanley and KISS, fans recently took to the KISSFaq message board to discuss if there will ever be another group as popular as Paul Stanley and company ever again. one user, named Spiritof76 stated: “A lot of crying about the world moving on. It happens. I was lucky to grow up in an era of great rock music. I value that. Think of it though, music has always transitioned. The Beatles turned into the Stones, to The Who, to Deep Purple, to Black Sabbath, to Alice Cooper, to Kiss, etc, etc. You think people who grew up on The Beatles look at Kiss and say “Now that’s rock music”. Of course not. They thought great music died.”

Paul Stanley ‘refuses’ to leave store in KISS photo.  The user continued: “Nostalgia acts are big because the people who grew up on them are the earners in the world. It is the same reason Elvis could still draw in the ’70s. Let’s face it, he was drugged, fat and lifeless but people went because that was they considered “real music”. There is still good music out there, it is different though. You will find the occasional band who brings you back like Greta Van Fleet or Black Coffee, or The Lazys, Dirty Honey, Blackberry Smoke if you’re into the southern rock thing. The point is, it is out there. Go look for it. Don’t get caught up if it fills nibblers dots on a website. That shit doesn’t make music good. Explore, there is a whole world out there, and it is full of music. Good music. You can read the interview at C-Ville.com.