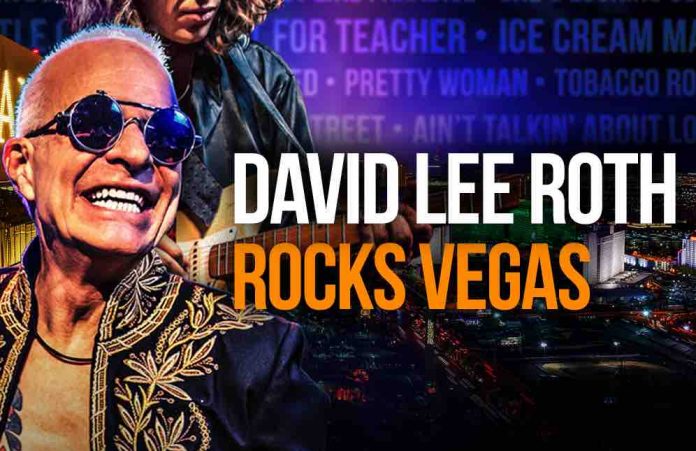 A fan recently asked Hagar, “Did you see/hear the nightmare aka DLR in vegas?”

Hagar responded, “Oh Lord have mercy I couldn’t make it through one song and I’ve tried more than once. It’s a comedy act.”

NOaverageJOE posted on VHLinks.com about Roth’s Vegas show, “I’ll come out of posting retirement for this one since Dave’s voice has always been my favorite subject. My take is that Dave’s voice has miles on it and works a lot like a car with a bad transmission. He jumps gears.

He can sing okay in his natural range, but even that part of his voice is scratchy from overuse and abuse (talking, smoking, drinking). I expect his lower notes will get smoother and stronger throughout this year if he stay healthy. The upper end of his natural range has sometimes been avoided since he cracks when he belts at times. In 2012 he pretty much stopped belting and tried to use his head voice. In 2015, he did the same approach for a bit but ended up slowly easing back into belting once the head voice failed him enough times.

The first two shows this year have been all over the place for Dave vocally. I think he’s trying to use every trick he has had in the past when he gets lost or excited. Some of it does not seem intentional, and I wonder if his hearing is off or there are sound issues because he’ll strain some ridiculously high notes until he eventually lands one. If he would stop the screeching out of his natural range, he would sound acceptable to most people.

Luckily, he isn’t doing it too much and it is not working for him, so I think he may abandon that technique aside from quick “go! go!” notes if he can’t get it under control. I honestly don’t think Dave ever had control of that high range and don’t understand why he keeps going to it, especially when he can still belt in his natural range. I’ve been impressed with his ‘Just a Gigolo’ performances and how much he is hitting notes like he used to.”

He later added, “Overall, I am impressed that Dave’s voice hasn’t declined since 2012. If anything, he is definitely singing better than 2012 with the blower excuses and some stuff is sounding better and other stuff is sounding a bit worse than 2015. Again, if he stays healthy, I think he will improve and smooth out a lot of the weaker areas. He’s 65 and is putting forth effort to put on a good show!” Eddie Van Halen’s family made a sad ‘collapsing’ claim a few days ago.