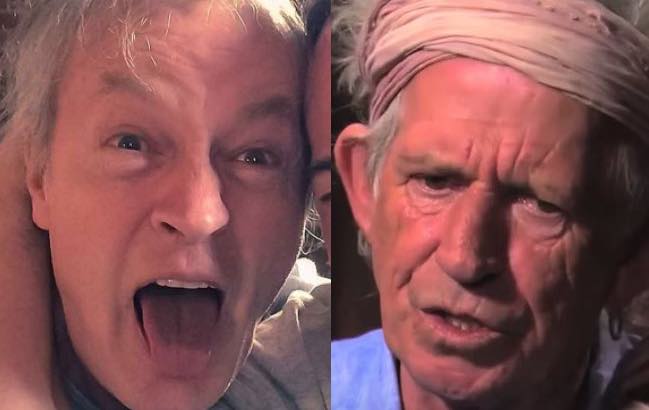 AC/DC guitarist Angus Young revealed in a newly unearthed Classic Rock interview from his hey day that he was sick of Keith Richards and The Rolling Stones, and felt they were no longer a rock and roll band. Keith Richards nearly dying on a plane was recently revealed.

“The Rolling Stones get up and play soul music these days, and this is supposed to be rock’n’roll. Leave that to the people who do it best, the [African Americans]. If the Stones played what they do best, they’d be a helluva lot better and they’d probably find themselves at ease.”

He also said, “I don’t know anybody who’s gone to see any of those serious bands who’ve enjoyed it. They may say it was great, that the music was good, but somewhere during that set they were bored and were too scared to admit it. If I went to see somebody that was ‘musical’, I’d yawn my head off. I’d end up walking out to the bar. Bands like Yes would be a bore to see, unless they had some Sheila strippin’ off.”

Angus Young ripped a big name for rejecting an AC/DC tour in an interview. DoinNothingMeansALot posted recently on ACDCFans.net about the importance of Stiff Upper Lip, “I really don’t know what to say to all of this heresy. If you don’t like SUL, you don’t get a major aspect of what AC/DC is about; blues. This is the closest we ever got to a Brian-era Powerage, and Can’t Stand Still is the Gone Shootin.

Such a bluesy jam session where everyone is just having a ball. Meltdown is a f***ing stomping riff that reminds me of RNRANP in ways, and Brian is absolutely belting it out in this one. Not to mention that cool, crashing (as Jem accurately described it) outro with Angus’ guitar sounding almost psychedelic with its slightly dissonant notes and slides.

A stunning list of new AC/DC songs was recently revealed. The AC/DC fan continued, “Also, I cannot believe anyone trashed Hold Me Back, considering it has Malcolm’s solo on it, which is cooking so f***ing hot it’s ridiculous.

Somebody rightly called out the brilliant groove of the verses in Cant Stop RNR. Also a killer solo there. Safe In NYC has some classic Malcolm single note riffing in the verses, using those same groovy notes as Beatin Around the Bush and Playing With Girls (chorus). I love when they toy around with patterns around those notes. House of Jazz is another belter for Brian, and Malcolm’s chords (especially that low E) in the main riff and under Angus’ solo are so f***ing dark and heavy.”

You can read the full Angus Young interview at Louder Sound.