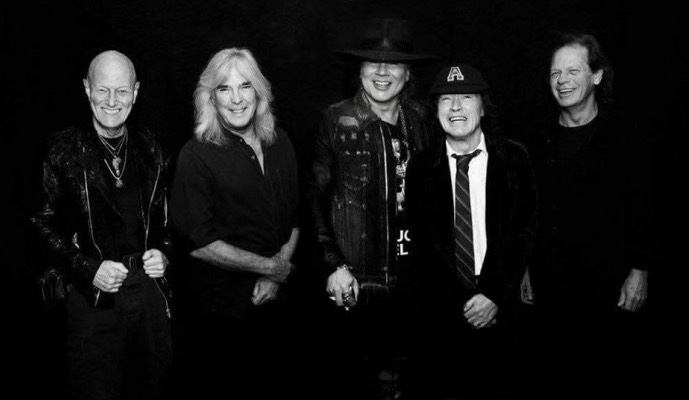 AC/DC have been back in the news with rumors of a reunion tour, though one AC/DC icon called Angus Young a ‘recluse.’ Axl Rose took over AC/DC in 2016, with an ugly breakup with Brian Johnson due to his hearing issues leading to the decision, and during a recent interview with Appetite for Distortion, Comedian and former SNL cast member Jim Breuer revealed what really happened when Axl replaced Brian during the breakup. Alternative Nation transcribed Breuer’s comments. A rejected new AC/DC album cover leaked yesterday.

Brando: Are you a fan of Guns N’ Roses?

Breuer: I am, I am. Listen, I was agitated and I’m still agitated from years ago from the ego and the not showing up, making the fans wait forever. That just annoyed me as a consumer, it pissed me off. If I’m showing up at your restaurant and I made reservations for your restaurant at eleven AM for a great brunch, I bring everyone and you make me wait until three o’clock to eat, I’m never going to be at your restaurant again. So I don’t understand why people are like: “whoa, how can you be mad?” If I pay and it says here that you go up at nine o’clock and you go up at midnight or just don’t show up I’m not coming to see you again.

That was rude and you’re a jackass for making me do that. Now, people grow people change, so I’m alright with that. I wasn’t against him but rather I was aggravated at the situation. So, when AC/DC went down or when Brian Johnson was just gone there was no: “Hey listen, here is what’s going on, we are gonna get him to fix it.” It was like – Yup, there’s our new guy, there’s who’s singin'”

Brando: Really, that’s how it went down?

Breuer: Yeah there was no official announcement to go: “Listen” it was rather: “We thank him for our services” Thank you for our services?! The man that sang Back In Black, Shook Me All Night Long, AC/DC was here and then they went to a whole new stratosphere.

Breuer: For Those About To Rock, the famous video of Thunderstruck, every arena plays those songs and you just go: “Thanks for your services – Axl lets go.” What! This is my family breaking up. My father just came in and said: “Listen your mom is gone but here is your mom in the meantime.” Woah, Woah, Woah!!!