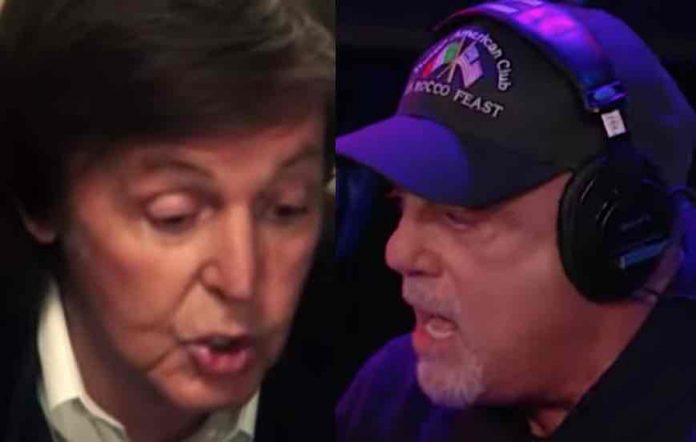 Acclaimed singer-songwriter Billy Joel discussed with Howard Stern about quite a unique meeting with the iconic co-founder of the Beatles, Paul McCartney. The revelation came in a throwback interview clip that was recently re-uploaded by the Stern social media team. Here, Joel reveals how Sir Paul came over his house to hear some piano compositions that were written and vice versa. Beforehand Joel says how he had to make some interesting preparations for the encounter by ‘hiding his meat’. Alternative Nation transcribed Joel’s comments to Stern. Ringo Starr recently unloaded on Paul McCartney ‘hatred’.

Howard Stern: Billy are there moments that no one knows about where you got together with let’s say, I don’t know, Eric Clapton or The Beatles or a session that happened late at night where you all got together in almost moments in your career.

Joel: Well it’s not that. I mean, he’s not a meat guy. I’m looking at my fridge and I’m seeing turkey breast and you know cold beef or something. It’s starting to look like Jeffery Dahmer’s refrigerator. I’m thinking if Paul opens the fridge he is going to freak out, run out of my house and never talk to me again.

Joel: So I decide I’m gonna take all the meat out of the refrigerator and put it somewhere else. Literally I was gonna hide the salami. So I go through the fridge and I’m pulling out this and that and I’m hiding it in drawers.

Stern: Really? Because you cared and you didn’t want him to be offended.

Joel: I didn’t want to bother him with my meat. I had to put it somewhere because he was coming. I’m looking at my watch, he’s gonna be here any minute. Where do I put the meat? Okay, I put it in the pantry and I put it in the drawer. Ringo Starr revealed how he and Paul McCartney ‘ended’ The Beatles yesterday.