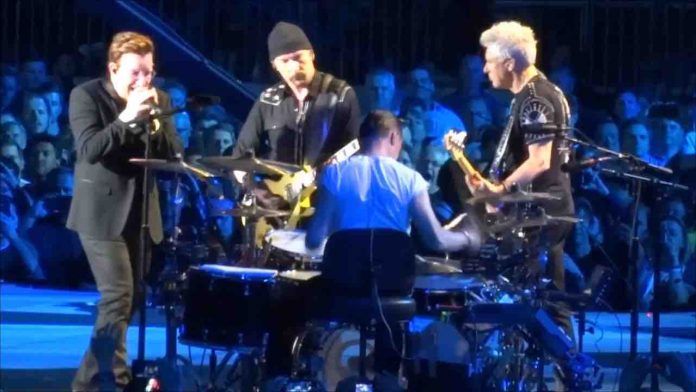 The Twitter account for the Italian-based U2 fan club, U2 Club Italia posted this rather interesting video snippet of band frontman Bono over the holidays with his family and daughter. Here you can see him wearing a mask of a very familiar figure – Bono himself! It’s Bonoception! You can view the video below. Bono beach photo stuns U2 fans, is he overweight?

In other news regarding Bono and U2, one fan recently took to the group’s subreddit to discuss U2’s potential musical direction and what they should do moving forward in the coming years, suggesting that the group should take time off and come back reinvented.

The user, Felix72 wrote: “Wouldn’t it be great if they decide it’s time to go off and dream it all up again? And they come back all new – in some crazy fucking direction none of us expected? I like U2 when they experiment and push the envelope and make me think “This can’t possibly work” and I find myself absolutely blown away. When Joshua Tree came out I thought the album couldn’t be topped. When Achtung Baby hit I was perplexed. I loved Until the end of the World but the rest of the album took time – I was confused – how could they re-create these songs live?”

U2 member ‘threatened’ at party, was Bono wasted? The user continued: “So many layers of guitar, keyboards – is U2 going to end up lip-synching this ****? But I also couldn’t stop listening – it’s like this is the music I’m going to love that I’ll never know that I’ll love. Achtung is my favorite album. It’s up there with Ziggy Stardust and Bowie at his most creative. Achtung sent them off in a different direction – Lemon, MOFO, Zooropa etc.. all music I never would have thought they’d be creating or that I’d be enjoying. We need them to burn it all down and dream it all up all over again.”

Another fan responded: “As much as I agree with you in that I want them to “dream it all up again,” I’m not entirely sure if that’s something that can be done at this stage in their career. Of course, nobody expected anything like Achtung Baby after Joshua Tree. I suppose it is possible, albeit unlikely. Then again, it is to my understanding that they are done with the whole innocence and experience thing so who knows. They just might come out of the blue with something unique. I’d love for some experimental material, but I think that pushes the boundaries of what they’re interested in at the moment. U2 member ‘spends night’ with A-List female singer.