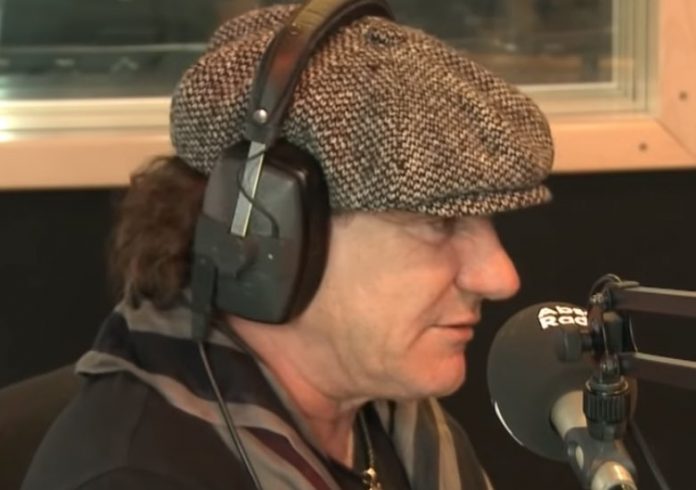 AC/DC frontman Brian Johnson discussed ‘struggling’ to write lyrics for Back in Black with Angus Young in a new video preview of his interview with Dan Rather on AXS TV. Alternative Nation transcribed his comments. An AC/DC member recently revealed his ridiculous car.

Rather said, “This is an amazing story. You’ve just gotten with the band, you’ve gone to the Bahamas where you said you’ve never been before. The first thing you do is you begin to write the lyrics for the album that became one of if not the biggest selling hard rock album in the history of the game.”

Johnson responded, “I know, isn’t it strange? It’s funny Dan, one of the things about being on that island, I remember five songs in I was like, ‘Gosh darnit, I think I ran out of lyrics.’ Because it was every day, and Mutt Lange the producer came on down and saw I wasn’t my chirpy self at breakfast.”

An AC/DC icon revealed a creepy Angus Young photo last week. Johnson added, “He asked, ‘Is everything alright Brian?’ Because he’s from South Africa, they talk like that. I said, ‘I’m struggling a little bit.’ Yeah, and it was a real bad day, the likes of which I had never seen before Dan, it was called a tropical storm. And the sky went black, and that thunder, and he went. He went, ‘A rolling thunder.’

I went, ‘Rolling thunder, pourin’ rain, comin’ on like a hurricane, there’s white lightning flashing. I mean, I literally was giving a weather report; I wasn’t writing a song. Just all those factors just helped, and of course one of the great things that happened so quickly, is you never realize Dan when something is so fabulous and just looks so easy, whenever you try it again it never works.” An AC/DC and Guns N’ Roses stadium performance claim was revealed a couple of days ago.