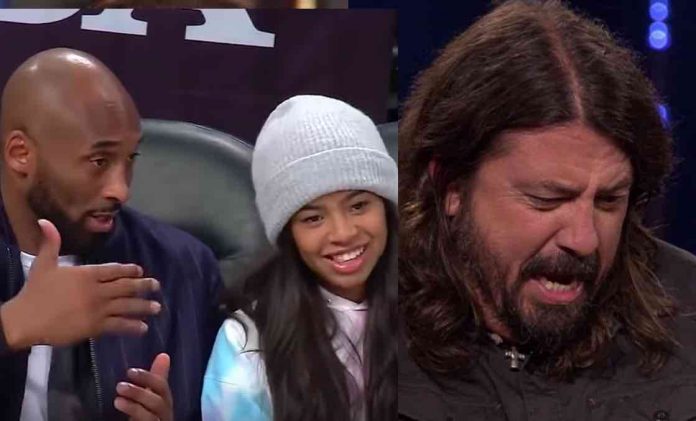 Dave Grohl performing an acoustic rendition of the Foo Fighters classic “My Hero” was played on Jimmy Kimmel Live on Monday night in honor of Los Angeles Lakers legend Kobe Bryant, who died Sunday in a helicopter crash with his daughter and 7 others. Dave Grohl was caught with John Lennon’s widow in a sad photo recently.

WamWamWazzleHeadwires commented on Reddit, “Been listening to this song a bunch over the last couple of days, in remembrance of Kobe. It’s amazing how much more powerful this song feels after such a devastating moment.”

Red Hot Chili Peppers bassist Flea wrote about Bryant’s death, “After stumbling around in shock this morning, then weeping, my wife and I sat in our morning prayers and devoted them to the Bryant family. Kobe, by virtue of his passion, intelligence, discipline, ferocious spirit and thoughtfulness, brought me oodles of joy. He inspired and uplifted me. I was in awe of him. He brought our city together, all of us.

The fact that he embraced me warmly the few times we met touched my heart. To see him grow the way he did, from an unapologetically intense competitor, then at the end of his career, becoming wiser, kinder, grateful and loving in his role as a pillar of Los Angeles, was as inspiring as his immortal acts on the hardwood. His love with his family, seeing his beautiful little girl Gianna bust her turn around jumpers, and him being there for her at every turn warmed my heart. May their souls be in bliss with God. The energy he brought to this earth will always be remembered. My condolences and love to the Bryant family. I mourn today.”

He also said, “Was humbled in his presence.” Anthony Kiedis said, “Millions of broken hearts release their love for you Kobe Bryant and your daughter Gianna. Thank you for elevating our world and may we always be here for your family. You meant and will always mean the world to us. Peace be with you sir. Mamba4life.” System of a Down’s singer ‘refusing’ a Dave Grohl tour offer was just revealed.