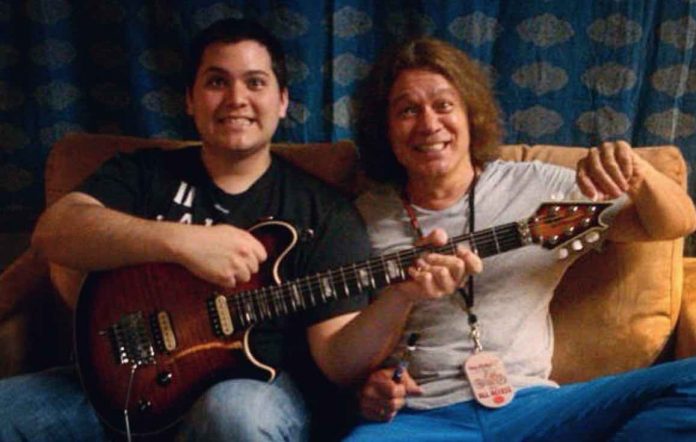 Eddie Van Halen broke his silence over the weekend after David Lee Roth responded to a question in a radio interview about Eddie’s health, saying he’d heard the same rumors as everyone else, but refusing the elaborate. Eddie posted an MTV award photo, leading to his son Wolfgang Van Halen to comment on the post. Eddie Trunk revealed rumors he heard yesterday about Eddie Van Halen possibly seeking treatment, and a photo that was sent to him.

Wolfgang proclaimed, “Dang! I remember when MTV actually had something to do with music!”

samfan1947 asked Wolfgang, “@wolfvanhalen Hi wolf, is your dad ok? I hope all of you are doing great.”

theironeagle77 said, “@wolfvanhalen please let your father know we are all pulling for him!!!!

8bakershanny8 wrote to Wolfgang, “@wolfvanhalen I can’t believe you are old enough to remember when it was actually music. 🙂 it seems like it’s been forever since it was. I remember the day MTV came on the air. We would leave it on for hours and hours and they initially played only one video 24 hours a day. Seems so ridiculous that we left it on however we were anxiously waiting for more. It seemed like forever before more videos were played. I remember when the first twisted sister video came out. They stepped up the video content a bit at that time.”

timkeagyphotography chimed in, “@wolfvanhalen I remember when MTV first started. I was living in NYC and it was electric atmosphere. An exciting time to be alive and have music in every corner.” Michael Anthony and Sammy Hagar reacted to tragic news a few days ago.