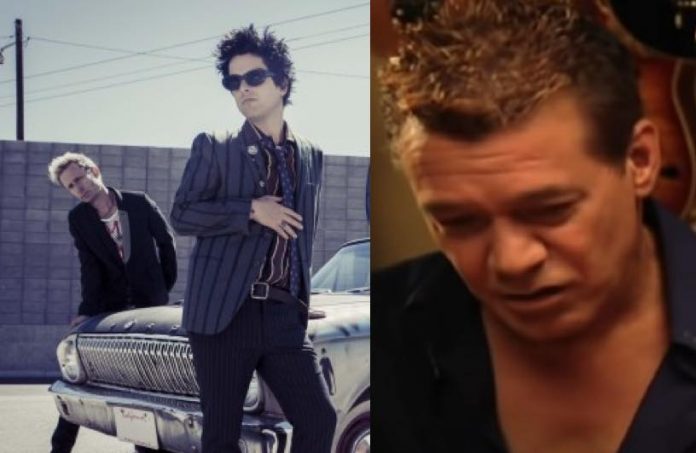 Green Day bassist Mike Dirnt has shared photos of Eddie Van Halen and his family on Instagram that will surely melt your heart. Howard Stern revealed a ‘loser’ Green Day remark recently to Billie Joe Armstrong. On Dirnt’s liked photos feed he commented on a new photo of Eddie with his son Wolfgang Van Halen and ex-wife Valerie Bertinelli, “That’s everything right there! 🤘🏽”

ziggysmalls wrote on the VHLinks.com forums, “That pic of the family probably was when the news broke that Valerie was having vigils at Eddie’s bedside while he was dying. Anyway going to focus less on conspiracy theories and will just assume Eddie right now has other priorities in life than VH. Sucks for me but its his life.” There were reports recently that Eddie Van Halen has been battling throat cancer again, and has been flying to Germany for treatment.

Eddie Van Halen was ‘caught off guard’ by a fan in a sad new photo. crazyjbn recently defended discussion of Eddie Van Halen’s 2004 performances on VHLinks.com, “Eddie is just inperfect man like the rest of us. He has his own problems he has to deal with. He is not God he’s just a musician that we happened to enjoy his music. It does not give him a pass for everything he does. I hate when people put musicians/ entertainers on a higher level than they should be.

So that anything they do is okay and that it’s perfectly okay to give a sloppy concert or a bad performance that someone paid for because he is a famous person slash guitarist / actor / actress and so on. To me it just amazes me that people give a pass over bad behavior because they’re celebrities. He’s just a man, there’s no need to worship him. He’s not above me or my family are more important than my family.” Eddie Van Halen’s family unloaded on a bad health accusation earlier this week.