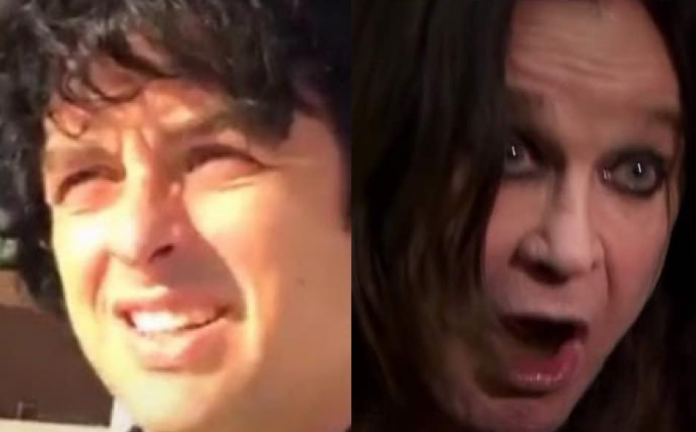 Ozzy Osbourne‘s daughter, the superbly-talented Kelly Osbourne took to social media via Instagram to post this photo of her and fellow A-List rocker, Green Day frontman, Billie Joe Armstrong. Kelly Osbourne was most recently seen as a contestant on FOX’s hit show ‘The Masked Singer’ where she was eliminated in week seven. Ozzy Osbourne accused of attacking famous woman.

In other Osbourne news, Ozzy Osbourne guitarist Gus G. revealed during a clinic in Denmark about what it was like to record Osbourne’s 2010 studio album ‘Scream’ with ‘The Prince of Darkness’. Ozzy Osbourne was ‘turned down’ by this A-list actor in a video recently.

G stated: “You can say it was nerve-racking. They made sure that I was very comfortable. We were recording at Ozzy [Osbourne]’s house. He had this amazing million-dollar studio in his basement. And they were, like, ‘Just take your time. Play your guitars. Take as long as you like.’ So it was cool. I was hanging out there for a few weeks with his producer, Kevin Churko. It was great times. He didn’t stress me. He just let me do my thing down there. We had a lunch break, and he would come down and take a listen to what I’d done for the day and tell a joke.

The guitarist also said: “It was also an interesting album for me because I’m so used to writing the stuff,” he continued. “But [the basic music] was already there. It was kind of weird because the songs were there – the basic song structures, but they had no solo parts, and the riffs were not really there either; just like themes. The producer would come and chop them in Pro Tools. So my job was to come in and replay this and make it sound as natural as possible. I redid all the stuff. I did all the solo sections; there were no solo parts or melodies or anything like that. So it was a very fun experience. Ozzy Osbourne made out with this woman at a restaurant not too long ago.