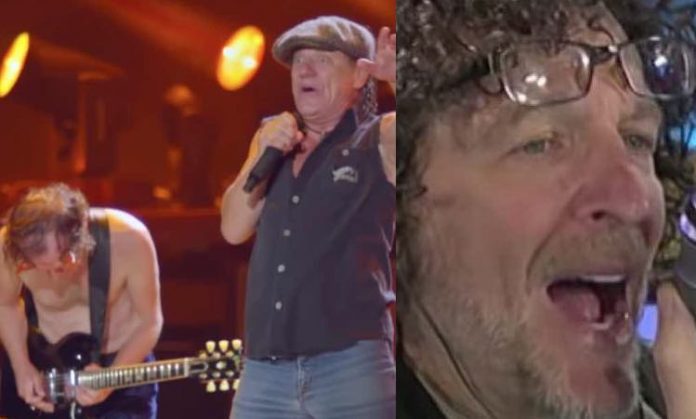 Howard Stern discussed Brian Johnson’s 2016 exit from AC/DC, and looked back at his statement on the show, and how at the time they made it look like he left voluntarily, though it later came out that he was asked to leave. An AC/DC member called out a horrible Guns N’ Roses show yesterday.

An AC/DC icon being somewhat in denial after being asked to leave the band by Angus Young was revealed a couple days ago. In another music related moment, after a break they played Willie Nelson’s ”Crazy” as they were coming back. Howard said he’s just listening to his great voice. He said Willie invited him to his house in Hawaii but he can’t go there. He said he was thinking about the reality of doing that. He said he’s not good in that situation. He said he can’t just hang. Howard said only he could be miserable in Hawaii. <>Howard said he has to get to Benjy. He said people want to know what went on. He said they talked about the other guys out there in L.A. He said there was a lot of controversy with Benjy.

He said they brought him out there against his wishes. He said he was on the fence about Benjy. He said he was a pain in the ass with everything. He said Memet was in charge of booking his travel for some reason. He said Memet was the reporter who was going to report on his antics on the plane. He said he asked when he was leaving and Benjy wasn’t able to give him an answer. Howard Stern revealing what Tom Petty smoked before he died was detailed yesterday.