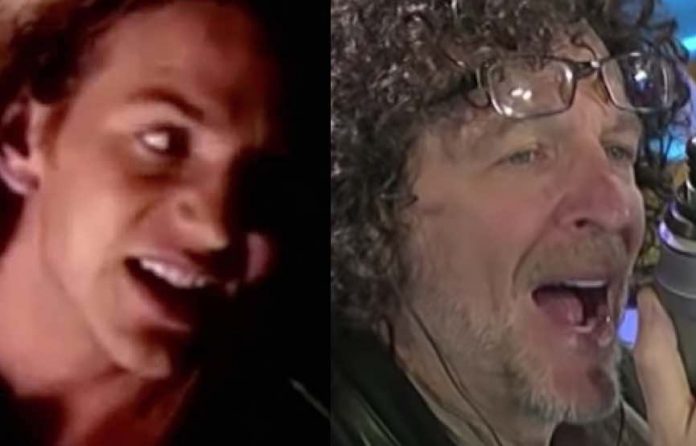 Howard Stern recently said he ‘couldn’t understand’ what the vocals to the Pearl Jam song “Yellow Ledbetter” by Eddie Vedder or the meaning of the title on his show. Pearl Jam just leaked a new song with a Nine Inch Nails surprise.

MarksFriggin.com recapped: After the break they played a Pearl Jam’s ”Yellow Ledbetter” as they were coming back. Howard came back and Robin said when she hears this she wants to be able to play this. She knew what band it was singing. Howard said this song is Yellow Ledbetter. He said whatever the f**k that means. He said it’s important though. He said you can’t understand what he’s saying but it sounds cooler that way.

Howard said he has the lyrics in front of him and even he doesn’t know what he’s saying. Robin said they have so many channels on TV and radio and there’s so much on. She said she ran into a show last night where Ron Wood was talking to Paul McCartney and they played music that influenced them. Robin said they played the record, not playing it themselves. Howard said that sounds cool.

He said he’d do a show with those guys talking about that stuff. Howard said there on SiriusXM he listens to the Tom Morello show and he plays stuff that influenced him. He said it’s a really good show. Robin said she loves that show too. SHE said she thinks Paul McCartney was wondering what he was doing on that show since they were playing music. Howard said that show is on AXS.

Howard said he was listening to Sirius the other day… Fred played some of Robin talking about taking her bra off from earlier in the show. Howard said she has to calm down over there.

Howard said they have so many channels for music there on Sirius. He said he tried to listen to a bunch of the stations and he got through about 5 and he forgot about the others. Robin said Howard goes to Lithium. Howard said he loves that channel. Robin said she listens to Classic Vinyl and 90s channels so she’s all over that.

Howard said he tries to listen to Deep Tracks. He said it was too deep for him. He said he has to hear something he recognizes. He said that he goes right back to Lithium. He said he was going to listen to Little Steven’s garage but he was afraid to do that. He said he may not come out. Howard Stern recently revealed what Bruce Springsteen did to his wife.