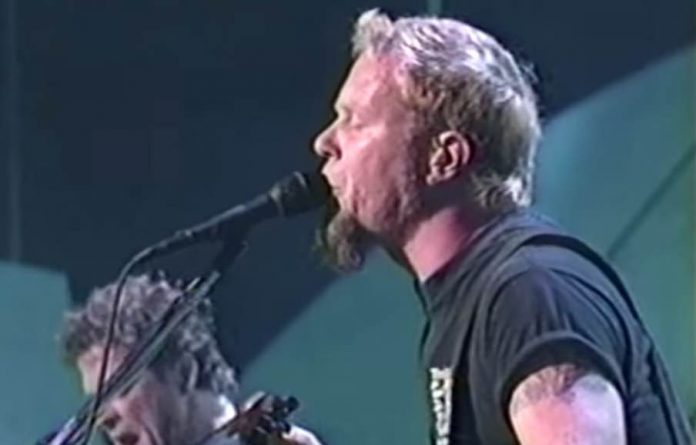 Metallica fans recently took to the Metal Sludge Gossip Board to discuss if bassist Jason Newsted can survive on royalties strictly from the Black album. During this discussion, one fan and forum member, going by the username RaceFan3 posted a lengthy response discussing why Newsted left the group in the first place and the inner turmoil between Newsted and James Hetfield at the time. Lars Ulrich wife bends over at beach in Metallica photo.

The user wrote: “Both Jason and James had their reasons, as they said in SKOM. James, in panic/over-controlling/micro-manage mode, flipped his shit that Jason wanted to do something outside of Metallica during their downtime. He feared it would conflict, or somehow take precedence. Jason was incredulous, saying there is NO WAY it would get in the way, that Metallica was his top priority and this was just a little thing he wanted to do on the side to create something for fun.”

Metallica icon allegedly ‘busted’ with alcohol by cops. The user continued: “Basically it was the perfect conflict. Total opposite viewpoints. Destined to implode. Jason had more than enough financial stability to walk away at that point, he wasn’t on board with the Towle bullshit, and James & Lars emerged full force as the modern Gene & Paul. I would’ve left too. You don’t put up with unnecessary bullshit if you don’t have to. Jason didn’t have to anymore. The band treated him like total shit from day one to his last day – and the band even admitted as much! They gave him the fifth wheel vibe from the get-go because he was a replacement guy, which is total hypocritical bullshit by James & Lars considering, technically, that both Cliff and Kirk were replacement guys too. They get revered, Jason got hated. Jason made his money, then told them to piss off.”

Metallica icon calls out ‘sloppy’ Dave Mustaine performance In other news revolving Metallica, fans recently took to social media to discuss the impactful legacy of the aforementioned ‘Black’ album. One fan said: “Many years ago I heard Kirk Hammett (I think it was him) talking about this Black Album, and how the band was constantly amazed at how, year after year, it kept selling strongly and stacking up one platinum award after another. They band knew it was a great album, but still – what could explain the continued good sales figures? The band decided it must be that every 13 year-old boy gets this album for his birthday or something. So for many years now, I’ve bought this album for children of friends and family as for their 13th birthday. It’s a great musical reference for every boy to have at the beginning of some very difficult years ahead.”