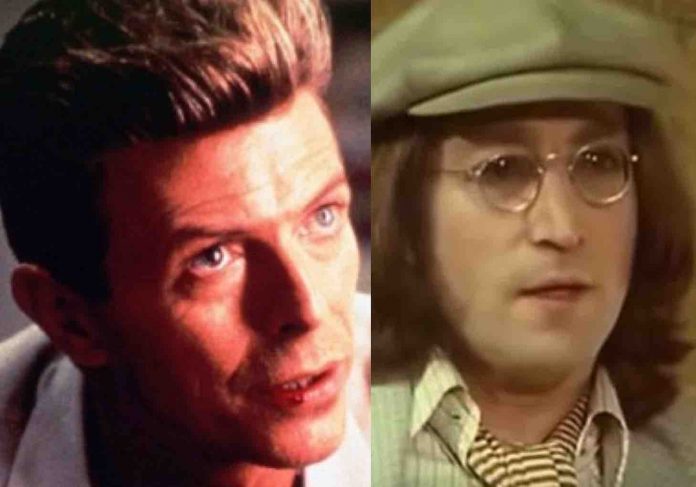 The official Twitter account for late and iconic co-founder of The Beatles, John Lennon recently tweeted the following quote. The quote reveals a surprising layer of praise from Lennon towards another music icon, the late David Bowie. The quote was posted with a video of Bowie covering Lennon’s classic hit – ‘Imagine.’ John Lennon ‘steroids’ claim leaks in sad photo.

The account put: “I must say I admire him for the vast repertoire of talent the guy has, you know. I was never around when the Ziggy Stardust thing came, because I’d already left England while all that was going on, so I never really knew what he was… I think he’s great.

In other news regarding the Beatles and John Lennon, one fan took to social media via the official subreddit for the ‘Fab Four’ to discuss why he believes it was most beneficial for the Beatles to break up when they did. The user stated: “To be honest I think The Beatles couldn’t have remained relevant and popular past the 60’s and instead of ending at the top and being remembered for generations they would have faded into obscurity and not be seen as special as they are along with a more muddled and cluttered discography since I can’t imagine them being able to keep living up to the Beatle name in experimentation and songwriting prowess. Furthermore, it restricted the band members to the Beatle sound and in some ways limited them a lot.'” Paul McCartney brutally rips John Lennon family.

With another fellow Reddit user replying: “[The Rolling] Stones music from the first half of their life still holds up and they are still considered possibly the greatest band along with the Beatles. So even if the Beatles did trail on I don’t think it would affect their standing that much and we might have got a few more killer tunes. I will say though it does show this impeccable timing and almost fate to their career they had. Everything they did became iconic – Hamburg leather and sweaty rock, clean catchy and beautiful early pop, experimental rock, getting trippy, the let it be session “band breaking up caught on tape” became an archetype much copied, Lennon’s “we hoped we passed the audition” perfect little summary send off (even though they kept going). Everything they did seemed almost written. And then splitting up when they did at probably just a little bit past their peak, again just underscored the almost magical sense of timing they had. Always leave them wanting more is a stage axiom and this band had an uncanny stage sense. Just an amazing story with a great soundtrack.” John Lennon Widow Reveals Bad Haircut Before Death.

I must say I admire him for the vast repertoire of talent the guy has, you know. I was never around when the Ziggy Stardust thing came, because I'd already left England while all that was going on, so I never really knew what he was… I think he's great.https://t.co/cWQuZuNz17