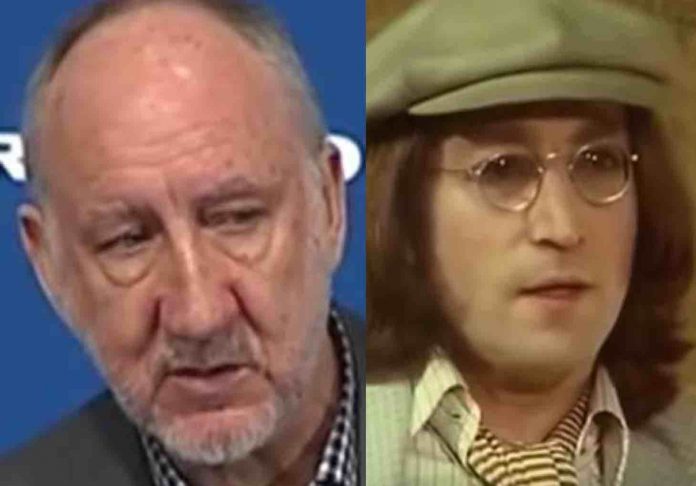 The official Instagram account for late The Beatles icon John Lennon posted the following handwritten song lyrics and a quote from an old feature circa 1980. Here, Lennon describes how he and The Beatles managed to create a record with backward music on it before any group or act including such A list talent as Jimi Hendrix and The Who. Ringo Starr made a painful John Lennon widow remark recently.

“Rain” [the B-side of the “Paperback Writer” single, recorded earlier in 1966] – that was the first record with backwards music on it. Before Hendrix, before The Who, before any fucker. I’d made the basic track, I got back to the house, I put it on – somehow I got it on backwards – and I sat there, transfixed, with the earphones on.⠀⁣
⠀⁣
I ran in [to EMI Studios at Abbey Road] the next day and said, “I know what to do with it – listen to this!” I made them all play it backwards and said, “I want that on the fade!” And the fade is me singing backwards with the guitars going backwards.’⠀⁣

This John Lennon awful ‘mad drunk’ video was revealed. In other news regarding The Beatles, fans of the Fab Four debated if pre-Rubber Soul Beatles hurt their long term reputation in a recent topic within the band’s subreddit.

KDoggIsBack kicked things off by asking: “I want to first say that I’m not claiming the pre-Rubber Soul albums are at all bad, I still like them. Honestly there are great songs on the older albums, however, I feel like in many ways their image of mop-top pop stars hurt their reputation to people who aren’t familiar with their music. I’ve seen many instances where people will hear a heavier or more experimental song (Helter Skelter for example) and are legitimately shocked when they find The Beatles made it. Many people seem to hear about how great The Beatles are, not how great their music was if that makes sense. Anyways, what are your thoughts?”

John Lennon revealed who Paul McCartney ripped off. Tplgigo responded with: “The pre-Rubber Soul albums sold better than anything in history. By the time Rubber Soul came around, they lost a few of the “yeh yeh yeh” fans and gained millions more like me. Everything from then on still went straight to number one. I’m not quite sure what you mean.

Lango6 chimed in with: “You have to remember that even during the Beatlemania days their music was always breaking new ground. Those earlier albums may sound poppier and less mature, but they are the reason that Bob Dylan got hooked, for instance. He loved their uniqueness and creativity.”