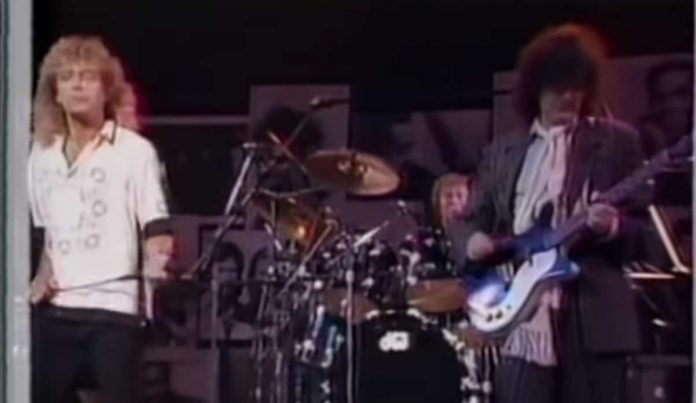 Led Zeppelin reunion shows drummer Jason Bonham revealed how someone tried to con him with a car that they wanted him to think was his late father John Bonham’s for a million dollars.

“It’s like the guy tried to sell me the hot rod from the movie The Song Remains the Same, the one where he’s got the hot rod with the front engine that he drives. The guy was trying to sell it to me. He didn’t realize that my dad took the engine out of that car before he got rid of it and put it in his Corvette. So he’s trying to sell it to me with all original things in it, and he wanted a million for that. I said, ‘Dude, Dad put an old engine in that. It’s not worth the money, it doesn’t drive very well.'”

He also discussed buying a 2017 Ford VelociRaptor, his ‘toy’ car that he rates a perfect 10. Robert Plant was stunned by a terrible concert paycheck over the weekend.

“I sent it to John Hennessey, and it became a VelociRaptor, hence it’s 700 hp. Nothing I own is under 570 hp. I absolutely love it. I don’t feel guilty when I’m driving it, I don’t feel like I’m putting on too many miles. It’s that car you can go to Home Depot in and throw s–t in it, and it’s still twice the size of the biggest Range Rover they make. It’s big. I can’t even get it in the garage, it’s so big.”

He made the comments in a Motor Trend interview.

Jimmy Page wrote on social media recently, “On this day in 1985, The Firm played Meadowlands with Les Paul. During ‘The Firm’ tour, we were due to play at Meadowlands, New Jersey.

I’d hooked up again with Les Paul in New York, and was really keen to introduce him onstage and establish what a tremendous influence he had been on myself and a whole playing and recording generation. Les accepted the invitation and on that evening, surprised me by saying that he had a small investment in Meadowlands going back some years.”

He wrote about a Yardbirds tour, “On this day in 1967, the four live Yardbirds played the Santa Monica Civic, having played Santa Rosa the day beforehand, so these were our LA shows before going to perform three nights at the Fillmore in San Francisco. Also on the line up were West Coast heavyweights Moby Grape and Captain Beefheart.⁣” A Led Zeppelin icon revealed how much money he lost after tragic news last week.