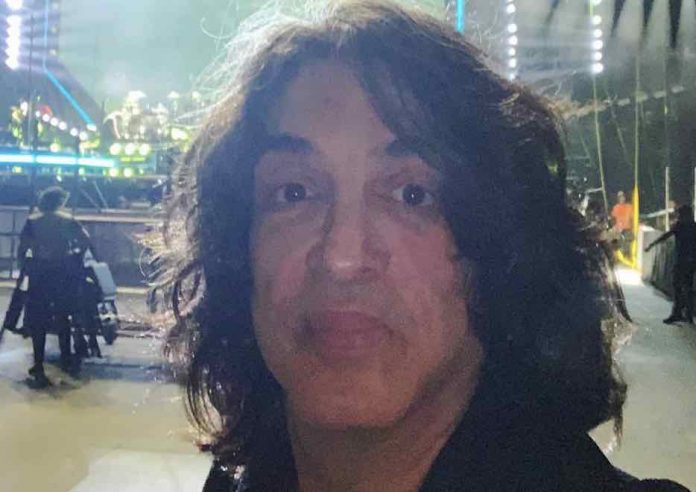 Iconic Kiss frontman Paul Stanley has taken to social media via Twitter recently to share this photo of him during the group’s soundcheck prior to their most recent performance at the Tokyo Dome in Tokyo, Japan. Most notable here is two things, that Stanley is unmasked without the trademark Kiss makeup and that he is wearing the most ridiculous looking hat we’ve ever seen! You can check out the photo below. Paul Stanley mocked for ‘laughable’ KISS performance.

In other news, fans took to social media to reflect upon the impact and legacy of Paul Stanley’s self-titled solo album. One fan stated: “It gets four stars because it is still KISS without the band. Paul Stanley is the most talented member of Kiss, the best songwriter and the best singer, not to mention the leader of the band. specifically, Tonight You Belong to Me could make any rock band’s album as well as “It’s Alright” and “Wouldn’t You like to Know Me.” But the fifth track, “Together as One” is the most apocalyptic KISS ever gets. It borrows heavily from the Beatles’s “I Want You-She’s so Heavy.” the D minor guitar riff and the closing part. but Paul gets emotional on this infamous song. I agree with the reviewer who said that this album ranks with the great ones of the seventies. KISS never got their due on the radio, having only a few top forty hits, ironically “Beth” their least favorite song but biggest. Buy the album for the first and fifth tracks. It’s a great solo effort, although Ace Frehley claims the best solo album by far for the group.” This KISS icon recently revealed what Michael Jackson did to Paul Stanley.

While another fan put: “One of the best rock albums ever recorded. It’s timeless. I have listened to rock for forty-five years or more. Remember getting Paul’s solo album when I was fifteen in 1978. Sometime in the 80s I got the cassette. Now, at age 54 and still rocking I personally believe, in my opinion, that this was one of the best timeless rock albums ever recorded. As a longtime Kiss fan since 1975, I realize now that 1978 is the year in which the problems in the band were tearing the band apart. I have a slight resentment towards the solo albums in 1978 but Paul’s solo album was/is in a class of its own. These are Kiss songs as well as Paul songs. Although I love all the original four members Paul always, again in my opinion, steered the ship. If you like rock music, this is the album.” Alice Cooper reveals if Paul Stanley ‘scammed’ KISS fans.