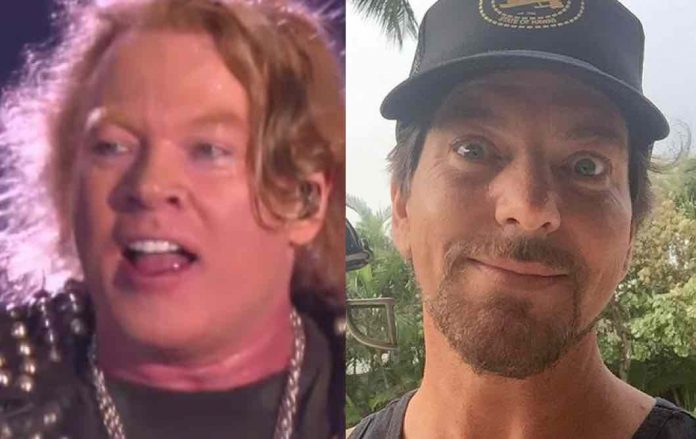 Pearl Jam and Guns N’ Roses were rumored to be in talks to play the 2020 Tecate Pa’l Norte festival in Mexico, Malv.news is reports. Tame Impala, Billie Eilish, and others were also rumored. Pearl Jam are reportedly planning 2020 European and North American tours, while Guns N’ Roses have hinted at a new album in 2020, which was coincide with a tour.

dimitrispearljam was skeptical of the Mexico rumor on the Ten Club boards, writing, “Mexico? There are no Pearl Jam shows booked for Mexico or South America.”

Axl Rose was stunned by a woman on drugs trying to rush the stage at a GNR show a few days ago. dimitrispearljam did drop a major hint though regarding European tour shows for Pearl Jam, “It’s f**ed up..it’s gonna be tough to go to first show from Greece and other European cities, as only 2 countries connect with that airport…from first place, to go to the second, you need a train to take a train to the other city for 2 hours, and then fly between 2-3. There are direct flights, over 120 euros cheaper. It’s gonna be expensive!! But it’s Pearl Jam, we have to go!!!”

one_stone wrote, “Graz would probably be an airport with very few countries served. Currently its three countries (if you exclude charter) but with summer 2020 flight schedule I can only count two. Plus its 2h30 train ride to the next big airport in Vienna. I would consider it an odd choice but Muse also played/reopened the arena there this year which I never saw coming.”

bootlegger10 said, “When it comes to touring you have to temper your expectations with PJ. Mind blowing means like 35 shows in a year. And they typically cancel or postpone tours for whatever reason and so the mindblown stuff probably went the way of the Big, Bold, Free unless you can hit these three shows in Europe. They never announce tours at the same time so a summer EURO TOUR gets announced in late November/Early December and a fall US tour is not announced until February or March. That is my guess and the US will need to wait for anything official.”

SandyRavage posted, “Well if we aren’t getting US News for at least 2 months, I can see the band playing Jazzfest again in New Orleans. Late December/early January is usually when they drop the lineup. When PJ played Jazzfest in 2016, Pearl Jam and Jazzfest announced their US tour/Festival lineup on the same day.” Pearl Jam announced their comeback album a few days ago.