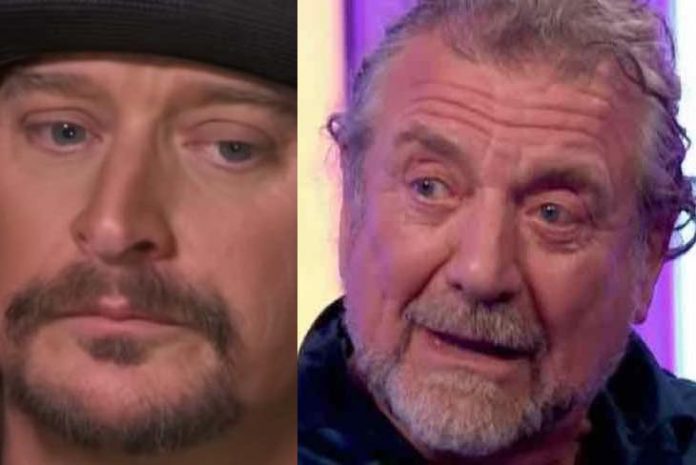 Led Zeppelin frontman Robert Plant took a lighthearted swipe at A-list country-rocker, Kid Rock during a new edition of his podcast, Digging Deep while discussing recording his VH1 Crossroads appearance with Allison Krauss. He also took a little shot at President Donald Trump. Fans have begged for a Led Zeppelin reunion, but Plant has preferred to do new projects with artists like Krauss. Alternative Nation transcribed Plant’s comments. Jimmy Page revealed today how money was robbed from him at a hotel in New York.

Plant: I got an opportunity, a friend of mine had been really powerful over at VH1 on the TV networks in America, Bill Flannegan was one of the main wheels there and still is a huge force in [inaudible] music – if you like. Flannegan contacted us and said: “We are doing this program called Crossroads, where we put artists who are putting artists who are coming from two totally different areas” – you know, Kid Rock and Joan Baez.

Plant: Or Kid Rock with Donald Trump, something like that, or any way. They said, “Do you know Allison Krauss?” and I replied that I did and she has the voice of an angel. You know, she sings very, very delicate songs about pain, heartache, and joy. She also plays fiddle and has more Grammys than anybody else.

An eerie Robert Plant and Kurt Cobain similarity was also revealed on the podcast. Kid Rock would indeed make for an interesting pair with President Donald Trump as Rock fiddled with a senate campaign bid in his home state of Michigan. One that Rock has decried since then as a “publicity stunt.” Recently, Rock was declined by the F.C.C. to be charged with federal campaign violations following last year’s “Kid Rock for US Senate” promotion. However, he has since kept himself politically active by fundraising for Republican Senate candidate – John James.