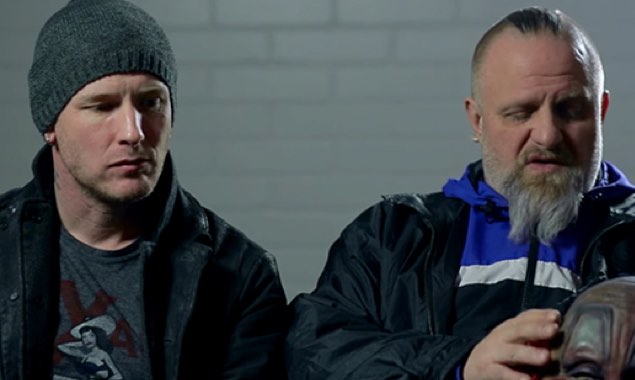 Yourladydeath commented, “😂😂 belt looks a little small.” Griffin responded, “@yourladydeath it’s a bracelet.” pancakes._.n._.icecream wrote, “Corey Taylor doesn’t need a heavy belt as he has like 6 albums that are heavy enough to make up for it.”

A Slipknot fan named SirMurfington recently speculated on if Corey Taylor could be replaced in Slipknot if he retires. Maybe Griffin Taylor could be up to the task someday? He wrote, “Clown has said that when he’s done he’s willing to let Gage replace him. So that’s where my question arises: what will happen will happen when Corey retires eventually? Will the band just disband or will they just keep going with a new lead singer?

An ex-Slipknot member recently revealed why he really left the band. Yourladydeath added, “The band has shown that they’re still able to keep going when a member is fired, leaves, or dies. Ultimately in a lot of bands, most people who play instruments can be replaced eventually to fill the role of their predecessor. But, singers are sometimes a different story and that’s when a band needs to decide if they have to hang it up or not. I feel like Slipknot could either be one of those bands where they hang it up after Corey and enough of the members from the late 90’s/early 2000’s quit, that they’ll eventually just stop, or they’ll be one of those bands that will just last forever with a revolving lineup.

I feel this question does ultimately come down to ‘what happens when Corey is done’ since Slipknot has replaced members in the past when they’ve had to, so they can always just do that with any of the members. But since singers are different, I just want to know what happens when Corey is done since he’s key to the band’s sound, business, structure, and writing. Please forgive me if I don’t make much sense in this post, at the time of writing it is currently 12:01 AM and the melatonin is kicking in as I’m typing this.” A Slipknot member revealed what really killed Prince a few weeks ago.