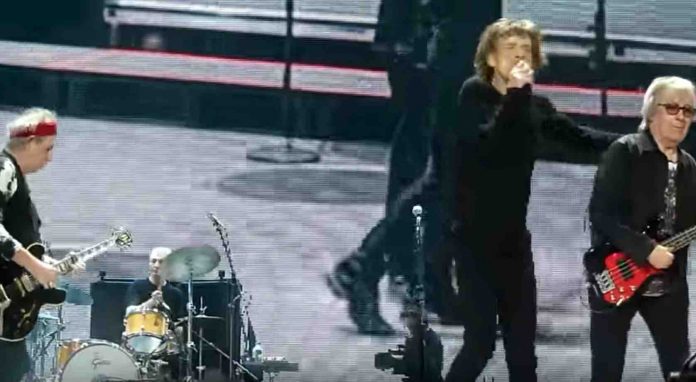 The Rolling Stones have revealed a new photo from backstage at their show in Denver. The photo shows writing that states: ‘Elev 5280. Altitude sickness is real.’ An ill fan recently wrote an emotional letter to The Rolling Stones with a request for the concert.

Mister0 reviewed the band’s recent show in East Rutherford, New Jersey, and said Mick Jagger, Keith Richards, and company were on top of their game.

“It was a bitter-sweet night for me. I went to the show with my Sister, her husband and daughter and my two teenage kids. We arrived early at Metlife at around 5:30. We were invited to the ‘Shodoobie’ tail gate party in the E-21 section of the parking lot.

Within minutes I talking with old friends that I have not seen in as many as 20+ years. We just picked up right where we left off. Taking pictures, exchanging numbers, introducing our kids to each other.

We got to our seats about 8:15 and Lucas Nelson was playing. I’m not familiar with his music. I did not know he was Willie Nelsons son. Overall I thought he was a good warm up act. Finally the lights above the stage were lit yellow with the “No filter” lounge. A few minutes after that came “The Rolling Stones” announcement and they went into JJ Flash.

From there the highlights for me were….Harlem Shuffle….I had not heard it live since 81. You Got the Silver…..My first time hearing it live. Miss You…..During Darrels lengthy bass solo my daughter said to me ‘How long is this solo going to be?’ and almost on cue Mick said to Darrel ‘Will you shut up already’….We had a good laugh at that. Paint it Black….I’ve always considered it on the highest tier. A true masterpiece.” Howard Stern recently revealed on his show what Paul McCartney did to Keith Richards on a songwriting level.