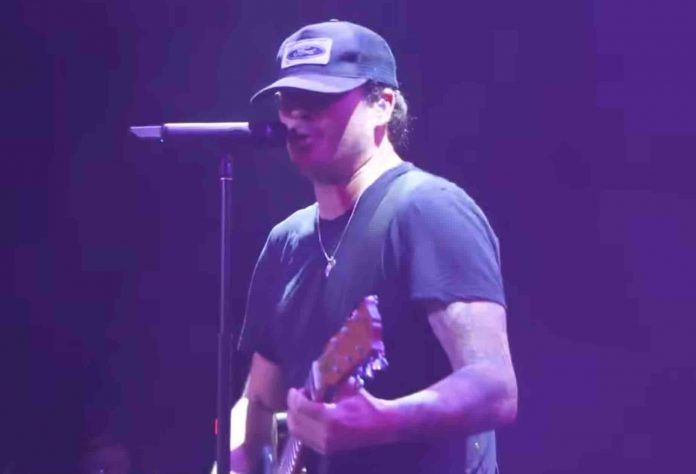 Blink-182 performed at the iHeartRadio ALTer EGO ’20 over the weekend in Los Angeles, and it featured the return of Tom DeLonge in an unexpected way. A backing track featuring DeLonge’s studio recorded vocals were featured during the performance of “Feeling This” on the live stream. Matt Skiba was heard singing over it, and this isn’t something that regularly happens at Blink shows, and it could have been because it’s a live radio performance. A Blink-182 member just unloaded on a big name pedophile accusation.

MynameisMclovin commented on YouTube, “Why the hell can I here toms vocals.” Anthony Perez added, “I thought I was the only one too, but iheart radio probably just wants to play it safe just in case “they sound bad” which is bullshit because even without the background vocals by Tom Matt is still great on his own.”

Kevin Laudenbach responded, “Why on earth would they play Tom’s backing vocals over Matt’s singing? That’s super weird and disrespectful to Matt. Unless he was sick and couldn’t sing or something it doesn’t make sense, and he was clearly singing just fine so…”

Damn head chimed in, “Wonderful Tom’s background, Skiba bad as always. Epic show. RIP Blink-182. We will miss you. Remove that disgusting Tom’s imitation and bring back the +44.”

Slick Nick said, “It kind of hurts that there’s people in that audience singing along to blink songs thinking matt wrote them. Like when they’re singing I miss you and they’re all going WHERE ARE YEWWW.”

Jbm012 posted on Reddit, “Whoever mixed the back tracks should be fired directly into the sun, that’s absolutely brutal.

2319wegota2319 added, “Just watched the beginning on decent (studio) speakers… The entire mix is an all around travesty (on… As a blink fan of old and new I can’t help but notice how bad the so called pro recorded live performances sound most times… As well as the way Matt’s guitar tone is setup/mixed compared to how present Tom’s guitar tone was live. I mean you never know who to blame especially with festivals like this, but I feel like Matt is too great of a performer to need to be hidden behind backing tracks/muddy tone as much as they do

Edit: I’m listening again on my phone speakers and I think maybe it’s possible they mix the sounds towards phone speakers, cause it does sound better on my phone lol but still bass is too loud, and guitar tone and backing tracks on Feeling This don’t mesh for me.” DedicatedSloth concluded, “So nice to hear Tom and Mark harmonize again.” Tom DeLonge made out with his new younger girlfriend in recent photos.