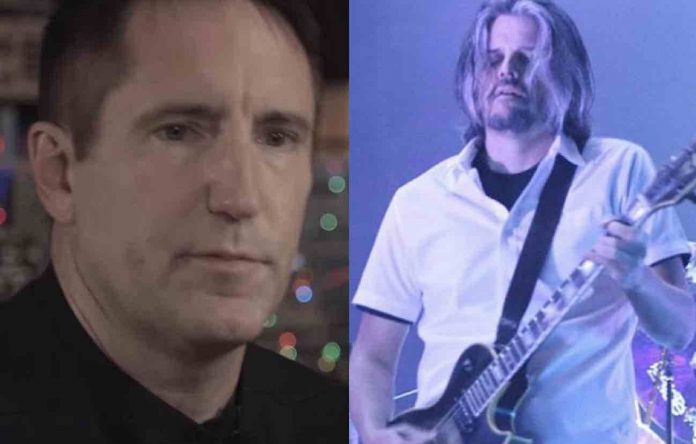 “I remember it like the back of my hand. It was fucking raining and the band Live were going on before us. And the whole audience threw mud at them the entire time. And they came offstage like, ‘Fuck!’ They were cleaning mud out of their strings and pickups and I remember saying to our old bass player [Paul D’Amour], ‘Let’s just jump in the mud right now and go onstage so we can kinda be like, ‘Hey, fuck you guys, we’re ready for ya.’ And he went, ‘No, let’s just see how it goes.’

Maynard James Keenan recently described a Tool fight in the studio. Jones added, “And not one person threw mud at us. And I was just floored. And that’s how I’ve always looked at coming to Australia. The people there really get us, they love us, they’re very passionate and they’re very respectful. They’re people who [understand we’re] really trying to make a difference and not just be some cookie cutter radio shit.” You can read the full interview at Junkee.

A Tool fan recently complained on Reddit that the new Tool album songs being so long is a problem for him, as the songs are still playing when he is done driving, and he doesn’t want to leave his car.

Idealistic_Crusader wrote on Reddit, “The only problem I’m having with the new album; When driving somewhere a song is never anywhere near over when I arrive, and I can’t just sit in my car for another 7 minutes till it ends.”

He added, “Aside from that bit of humour on the matter, I’m absolutely adoring this album. Can’t wait to put on my Sony MDR-7506 studio headphones, lay on the ground and disappear into the soundscape.”

El_Moi responded, “I pulled into my driveway today with about 9 minutes left on Pneuma. Bet your ass I sat in my driveway and finished every delicious second before I turned the car off!”

VVTFan said, “Went to the gas station and back yesterday. Took only 8 minutes combined. Couldn’t get through anything. Lol.” Maynard James Keenan called out new Tool album failure last week.