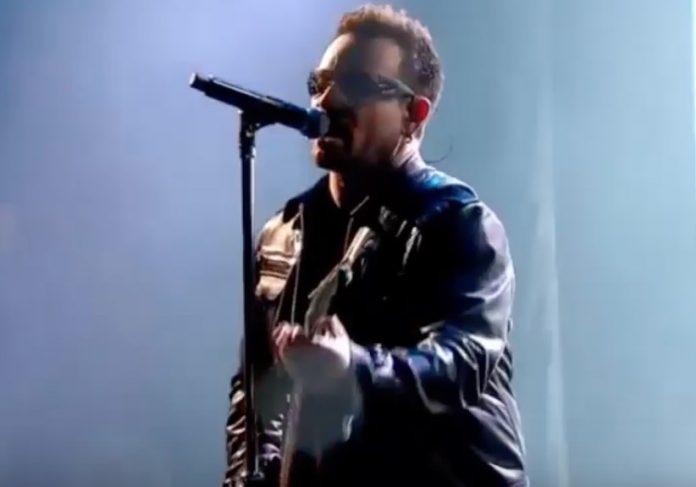 U2 fans and the workers over at Toners Pub in Dublin were in for a beautiful day like none other than Bono, acclaimed U2 frontman made a stopover to their establishment for a couple of pints, posing with the employees in the process. Bono begs for prayers after ‘falling’ at U2 show.

The pub’s official Twitter account had this to say about the experience: “Yesterday wasn’t a normal Monday here in toners, Bono visited us for a few pints and fulfilled Michelle’s dream. Thank you for being so kind with your fans.”

Bono reacts to U2 fan throwing bottle at him. In other U2 and Bono news, fans of the group recently took to band’s subreddit to discuss the merits and legacy of the U2 concert film documentary ‘Rattle and Hum’.

Reddit user DontchaBotherMe kicked things off by stating: “I know the band themselves hate the movie nowadays. The new songs on the album are great! the album I overall like despite the fact critics seem to dismiss it. But what about the movie? I watched it recently and it’s alright but very cringey. Bono’s thing where he goes “am I buggin didn’t mean to bug ya” after his political rant is pretentious as hell and hilarious. When they visit Graceland and Larry gives that speech about Elvis it’s obvious why Bono does most of the talking. The live version and speech of Sunday Bloody Sunday is great though! I wonder why it’s not on the album. All in all the movie is just ok and definitely didn’t paint the band in the greatest light. What do other fans think of it nowadays?”

Bono ‘heckled’ by U2 fans for angry remark. While another user, Tazzman25 said: “I enjoy parts of the movie(like them playing Desire) and dislike other parts(like The Edge staring off into the Mississippi…thoughts Edge? Please?) and this way too reverential photography during their color show in Tempe. The album is different though. The new songs are overall good(Desire) to very good and the live tracks are great.”

Yesterday wasn’t a normal Monday here in toners, Bono visited us for a few pints and fulfilled Michelle’s dream. Thank you for being so kind with your fans @michele.a.franca @u2 #bono #tonerspub #u2 #u2fans #ireland #dublin pic.twitter.com/l8E0ckSsC7