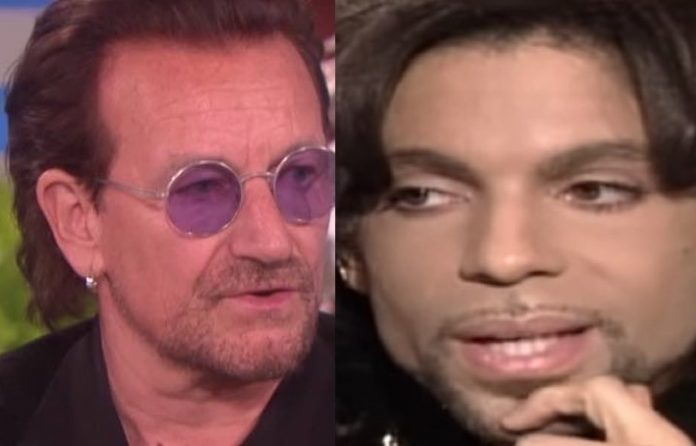 U2 members Bono and The Edge were asked about their biggest creative goals in a new interview, and Bono said that sadly in the 20 years before his death, Prince failed at having any kind of impact commercially with his new music. Scott Stapp revealed last month what Bono did to Creed.

Bono said, “Bono: It’s interesting for novelists or poets or filmmakers, being over 40 is never a problem. But for musicians, it seems more difficult. We listen to one of the greatest artists in the world, Prince for example. I’m trying to remember a lot of songs in the last 20 years of his life and can’t remember as many. You’re look at the biggest Prince fan that there is. But some artists have disproven this — artists like Miles Davis, Bob Dylan, you know…”

Green Day’s singer recently made a brutal Prince death remark. The Edge chimed in, “Every time you make an album, when you write a song, you’re trying to maintain a standard of creative potency for the work, and that’s not an easy thing to maintain. So it’s an ever-present constant plumb line that we established for ourselves, first and foremost. It’s not an external criticism, it’s our internal criticism and I think music and culture are continually moving forward, so for us as a band it’s always been a focus of ours — trying to remain somehow connected with that conversation and the culture. So those two things: our own standards and somehow connecting with what’s happening — that’s a lot. We still have ambition to do other things but that I think is the core focus, certainly for me, creatively.”

Bono recently revealed how Freddie Mercury hit on him at a concert. U2 are rumored to be working with producer Ryan Tedder on their next album. dcfb2360 posted on the U2 Reddit about the news, “U2’s had it wrong for years. They think the best way to maintain relevance is working with young producers, but the whole reason people loved them and respected them in the first place is because they took risks and experimented.

Imo U2’s terrified of experimenting because they’re afraid of losing relevance and becoming heritage/has-beens. Their popularity declined in the 90s after Zooropa, and it declined again after No Line. It wasn’t because No Line was different, it was because it was kinda lackluster in terms of songwriting. It’s got some great stuff (Moment of surrender), but it’s also got painfully dull filler songs like White as snow and Cedars of Lebanon. Point is, people have wanted U2 to do something different from their 2000s pop for YEARS. The whole reason a lot of people think U2’s not what they used to be is BECAUSE they keep playing it safe and making pop songs.”

You can read Bono and The Edge’s full interview at Rolling Stone India.