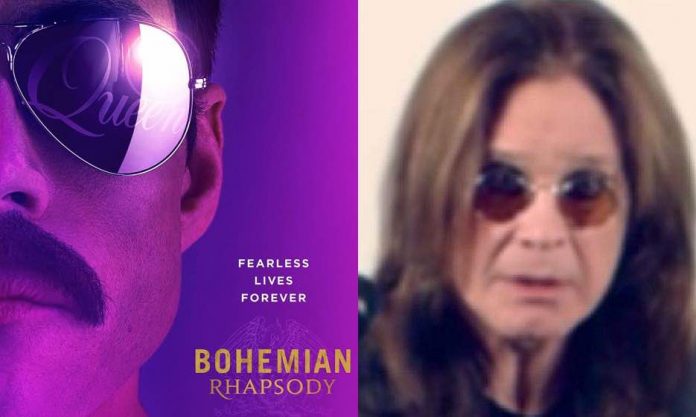 Legendary Black Sabbath frontman Ozzy Osbourne‘s wife Sharon Osbourne revealed in a new interview that she did not like the Freddie Mercury and Queen biopic Bohemian Rhapsody, and has rejected doing and Ozzy biopic written by Hollywood writers like Bohemian Rhapsody, Elton John’s Rocketman, and Motley Crue’s The Dirt. It was recently revealed that Freddie Mercury asked a big name to replace him in Queen before he died.

She said regarding Bohemian Rhapsody in a Celebrity Access interview, “I did not like it. I cannot watch it. Listen I know that kid got the Oscar, but I can’t watch it.”

The interviewer later said, “There was a film script a few years ago on the Black List about your relationship with Ozzy. Is it being made into a film?”

Sharon responded, “Oh my God, no. We are doing our own movie. We’ve got a deal and we are working with a writer right now, Ozzy and I.”

The interviewer said, “You have said that you don’t want to do another rock and roll, sex, drugs and money movie about a musician. So the film will focus on you two meeting and falling in love?”

Sharon Osbourne recently reacted a report about how much money she and Ozzy have. Queen guitarist Brian May recently wrote on Instagram, “It’s a day to salute these heroes – Neil Armstrong, Buzz Aldrin, Michael Collins, and all the lesser-known heroes who played their part in the Space Race – culminating in Humanity’s first foot in another World, this day, 50 years ago. But most of all – these three guys, whose names will live forever. I salute !! Bri.”

He also said, “An amazing day and night ! Thanks Adam for posting this. Thanks to all my family and dear pals for the Birthday wishes. Thanks ALL you beauties in the fabulous LA Forum tonight for singing to me – and with me … and being a truly wonderful audience. OK ! Deep breath !! Second Forum show tomorrow ! Grateful ! Bri X.”