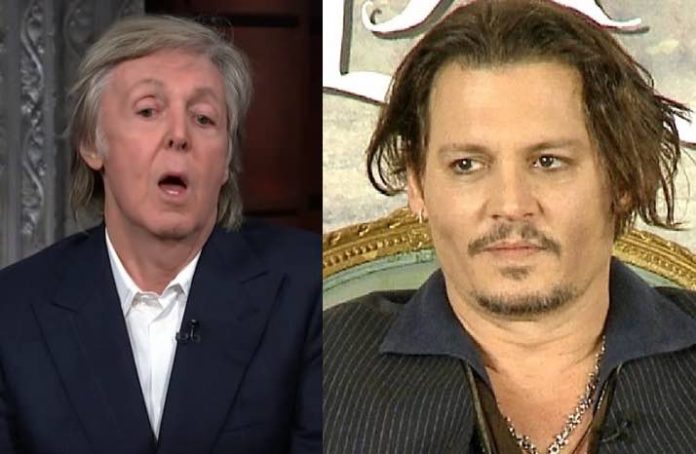 The account History Lovers Club recently posted the following Paul McCartney picture not too long ago. The photo features Sir Paul next to A-list actor Johnny Depp who is looking slightly bloated. You can view this photo below. Paul McCartney leaks ‘gross’ George Harrison photo.

In other Paul McCartney news, fans recently took to social media to reflect on one of McCartney’s most acclaimed post-Beatles albums – ‘RAM’. One fan wrote: “Ram is a great record. It lacks the intensity of Band On The Run in its rockers but makes up for it with inventive, sticky melodies. This is vaudeville, blues and country music spliced together. He had already experimented with this style starting with Magical Mystery Tour, but here the style dominates. All of the songs are well above average. I bought the 1993 remaster and got 2 extra songs; the excellent Another Day and Oh Woman Oh Why. The latter is not so good. He overuses his trademark fortissimo to give an “angry bluesman” effect to the song and ends up over-killing it. Otherwise, every song is a gem.” Paul McCartney recently caught wearing terrible wig in photo.

The fan continued: “Even the ridiculous Monkberry Moon Delight (In which he again overuses his fortissimo voice) is so good that it doesn’t matter that the lyrics are difficult to understand both because of their obscurity and his phrasing/delivery. It’s a fun, slightly melancholy listen that gets better and better with repeated listens. Dear Boy could’ve fit nicely into Magical Mystery Tour. Uncle Albert/Admiral Halsey is one of the best songs that he ever wrote. Too many people, long-haired lady and Back Seat of my Car have an age of Aquarius feel to them that still sounds fresh with Macca’s touch in place. A great record to start a Wings collection. Paul was the most prolific and satisfying of the Beatles and this album is proof of that.” Paul McCartney reveals what Howard Stern did to his wife.