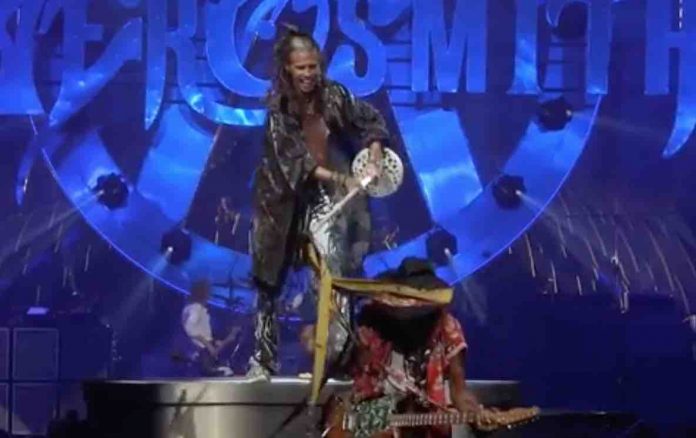 Aerosmith frontman Steven Tyler revealed this suggestive photo on Instagram recently when he shared this photo of himself grabbing his crotch during a recent show at Las Vegas, Nevada. You can view it below. Steven Tyler terrible haircut photo revealed, is he gray?

Raw, loud and energetic. That is how I would describe Aerosmith’s debut album. Not a bad track in the bunch. This contains the very first “Power Ballad”…yes, I’m talking about “Dream On”…a song that I never get tired of to this day. (According to Steven Tyler, in his autobiography, Joe Perry hated the song at first!) I recently listened to Steven Tyler’s audiobook version of “Does The Noise In My Head Bother You.” In it, he states that people have asked him why his voice sounded so different on the first album. His reply? Nerves. It was the first time the band had recorded at a major studio and Steven was nervous about recording his vocals. That, he said, is why he sounded like Kermit The Frog on those songs. “Kermit Tyler.” I think that’s why I love this album so much.”

The fan continued: “It has a rawness and, yes, an innocence to it. Plus, it’s a great album to listen to as loud as possible! Turn it on and “Dream On Until Your Dreams Come True!” Interesting note: Steven Tyler originally wanted to include “Major Barbara,” a song they did on stage as an opening act, as the final song on the album. But, instead, he and his bandmates opted for the Rufus Thomas classic, “Walking The Dog” (a song that, coincidentally, closes out The Rolling Stones’ first album!). It would’ve given a different feel to the ending of the album, had they included the former track.” Steven Tyler’s ‘bloated’ full stomach on Christmas was just revealed in a photo.