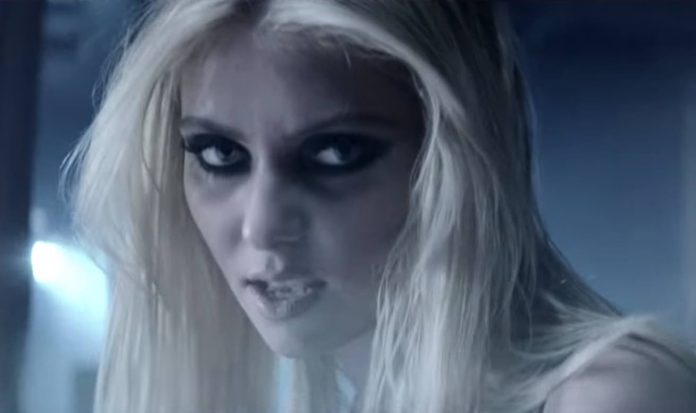 The Pretty Reckless frontwoman Taylor Momsen took to social media via Instagram to prove to everybody yet again that she is not only the world’s Gothic goddess but the toughest gothic princess to ever walk the planet. In this newly upload photo, Momsen can be seen showing off her dangerous side even more by licking a knife. You can view this photo below. Taylor Momsen ‘bends over’ in surprising date photo.

In other news regarding Taylor Momsen fans recently took to the music subreddit to discuss why Momsen strips in many of her music videos. Gedwyn19 stated: “I think that she was just exploring that side of herself. Rock n roll has always, and probably always will, have a sexual side to it. I think it’s probably – not having experience in that area – something that you would naturally want to explore and dive into a little bit if your up there on stage doing your thing. I can’t comment on the pressures of a young, teen, very sexy and sexual girl putting herself on stage in front of 1000’s of people and being vulnerable up there singing lyrics that you wrote. It may have been her own thing to explore and try out, it may have been external pressures and expectations, or a combination of the two. As someone else commented, it was apparently a phase. I guess I need to ask: Why shouldn’t she if that’s what she wanted to do?” Taylor Momsen tight ‘night gown’ photo leaks.

The user continued: ” My speculation? Maybe it was a comment on the exploitative entertainment industry she’s been involved with for years at that point. Kind of a – “is this what you expect? I’m gonna take it to an extreme, and btw, **** you.” Or maybe it was a rebellion against this puritanical, shaming society we live in here in North America. (which, in my honest opinion, should be fought against tooth and nail. its terrible.) Or maybe she just wanted to dress up in lingerie and show off her body on stage for awhile for the hell of it. Maybe it was fun and gave her a thrill.”

The user concluded: “Whatever her reasons, I don’t doubt that she thought about it and decided to do what she did – and that it was her decision. I hope she got what she wanted out of it.” Taylor Momsen ‘tiny’ shorts photo with abs leaks.